Teamsters Local 251 members have been on strike at Northeast Transportation Services, a contracted DHL service provider, since June 22. In response to worker demands for a fair contract, the Company said that while it has the ability, they feel it is “not in the Company’s best interest” to meet our workers’ demands to pay livable wages, offer affordable healthcare, and pay a share towards retirement. The South Carolina-based company apparently does not believe that employees have rights and deserve fair treatment. This at a location that has more than doubled in number of employees in the last two years. The Union believes the Company has committed unfair labor practices.

Teamsters Local 251 rally at Northeast Transportation Services in Pawtucket.
Teamsters Local 251@IBT251members have been on strike at Northeast Transportation Services, a contracted DHL service provider since June 22. In response to worker demands for a fair contract, the Company said that while it has the ability, they feel it is “not in the Company’s best interest” to meet our workers’ demands to pay livable wages, offer affordable healthcare, and pay a share towards retirement.

The public support from the community, other unions and local leaders has been unwavering but the fight continues for these couriers and dockworkers. It is crucial that we stand together and send a message to the Company that all Teamsters deserve fair wages and benefits.

Pictures and video from LIUNA Get Out the Vote Rally last week:

Governor Dan McKee Twitter:
You’ve had my back and I’ll always have yours. Together let’s continue to bring J-O-B-S to Rhode Island. Our campaign is #UnionStrong and I’m proud to have the support of

AFL-CIO: Once ‘Essential,’ Then Expendable, American Workers are Transforming the Economy

Last year alone $6.5 trillion flowed from the bottom 90% of wage earners to the top 1%. That means the janitor who cleans our child’s school, the nurse who cares for our sick father and the grocery clerk who always greets us with a smile are struggling, while the wealthiest among us literally skyrocket into space with bottomless bank accounts.

But our story—the American worker’s story—will not be written by billionaires. This Labor Day, working people are writing a new chapter infused with hope for a brighter future. We’re no longer tolerating being called “essential” one minute and treated as expendable the next. Whether on a manufacturing shop floor, in a high-rise office, in a corner cafe or Amazon warehouse, workers are transforming our economy.

Recent data shows that workers won 639 union elections already this year, the highest win total in nearly 20 years. What’s notable is that those victories occurred in many different industries. The heroic organizing efforts at Starbucks and Amazon have captured our imagination. Read more here.

New York (CNN Business)It’s not just about the money.

There has been a surge in union activism — including strikes and organizing efforts — in the last year that is being driven by factors far beyond pay rates and benefits packages.

If pay was the only issue, the nation probably wouldn’t be facing the risk of its first national rail strike in 30 years this coming week, a walkout that could knock the legs out from under the still struggling supply chain and be another body blow to the US economy.

A presidential panel looking at that labor dispute recommended the two sides agree to a five-year contract that includes an immediate 14% raise, backpay from 2020, and a 24% pay increase over the course of the contract. That’s less than the 31% in raises over five years the union is seeking, but more than the 17% previously offered by railroad management.

That was enough to get some of the unions to agree to tentative deals, but not the unions that represent more than 90,000 workers, including those who make up the two-person crews on freight trains. They appear poised to strike unless Congress acts to keep them on the job.

Those unions say they’re not rejecting the wage offer. Rather, it’s the work rules, staffing and scheduling proposals they object to, which require them to be on call, and ready to report to work, seven days a week for much of the year. If it were just a question of wages, a deal between the two sides would likely already be in place. Read more here.

It’s time for one of favorite union sports: NFL football! Will the Rams win it all again? Can the Bengals find a way to secure the trophy this year? Or will super-human Tom Brady add yet another ring? Regardless of what happens, one thing is for sure: snacks and drinks go great with some football. With that in mind, we’ve created a shopping list so that you can support good union jobs while you watch your favorite team. Browse the list below and cheer on your team while enjoying union-made products.

***Remember to shop for your food and drinks at Stop & Shop, Shaws and Eastside Marketplace where our union brothers and sisters work. 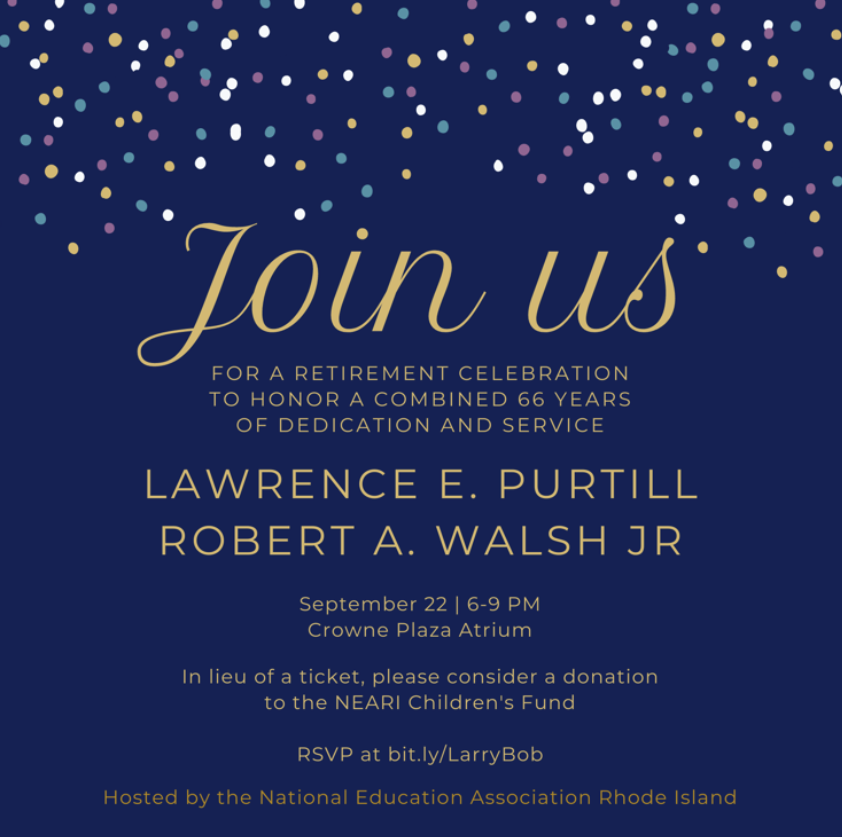 We are honoring Larry and Bob’s 66 years of combined service and dedication to NEA Rhode Island with an evening of merriment, cocktails and hors d’oeuvres – and a good dose of reminiscing!

A short speaking program will commence at 6:30 p.m.

In lieu of a ticket, please consider a donation in their names to the NEARI Children’s Fund.

Donations may be made online here, or checks made payable to NEARI Children’s Fund.

Union affiliates have all received mailed invitations to the ILSR 40th Annual Awards Evening on September 29th featuring guest speaker US Secretary of Labor Marty Walsh. If you have not received the invitation, please contact the Institute. Purchase of seats, tables, and ads must be completed no later than September 21st. For more information, call the Institute at (401) 463-9900 or email ads@riilsr.org