Providence, RI – The following statement can be attributed to George Nee, President of the Rhode Island AFL-CIO:

“The Rhode Island AFL-CIO is encouraged to see the House of Representatives schedule a hearing this Thursday on a package of meaningful gun safety legislation. Too many workers and other innocent people have lost their lives to senseless gun violence. Enough is enough. Gun safety is a worker issue. We thank Speaker Shekarchi and his leadership team on moving forward with this debate and we encourage all members of the House of Representatives to support the bills.”

The Rhode Island AFL-CIO represents 80,000 working men and women across the Ocean State. This is the first time the labor organization has taken a position on these gun safety proposals.

The Providence Journal: Opinion/White and Sabitoni: Superman plan mixes sustainability, grandeur of past

Coming over the crest of Route 95 it’s always comforting to see the venerable Industrial Trust Tower, literally towering over the horizon beckoning to travelers that Providence is near. The skyline is a familiar one — seared into our collective psyche and used for decades as a graphic tableau of Rhode Island’s capital city.

For sure, that magnificent building is our own monument to an era that defined progress and exuberance. Fittingly, as the Art Deco style of architecture implies, there’s a next-generation opportunity to mix today’s sustainability with yesterday’s grandeur to bring forth something equally stirring at 111 Westminster St. We attended the standing-room-only news conference at the State House where plans were announced by Gov. Dan McKee and Commerce Secretary Stefan Pryor, alongside General Assembly and Providence city leaders, to redevelop and reimagine the tower that was built in 1927 — about the same time as Henry Ford introduced the Model A to Americans’ wonderment. A sense of urgency was present in the State Room as many of the attendees had contributed energy and ideas toward a responsible and creative compromise. Read more here.

The Boston Globe: Unions endorse Amore for secretary of state

The Rhode Island AFL-CIO and other union groups representing more than 100,000 people are endorsing Representative Gregg Amore for secretary of state.

“As a public school civics teacher, Gregg understands the magnitude of the current moment we are living through – and will defend our democracy and our right to vote at all costs, while keeping our elections safe and secure, Rhode Island AFL-CIO President George Nee said in a statement. “We believe in Gregg’s vision to make voting easier and more accessible for all Rhode Islanders, because everyone deserves to have their voice heard at the ballot box.”

Frank Flynn, president of the RI Federation of Teachers and Health Professionals, said Amore’s work as a teacher, coach, and state legislator and his knowledge of government, civics, and finance qualify him for the secretary of state’s role. “He brings a keen intellect, strong work ethic, and collaborative nature to this role, which will greatly benefit the State of Rhode Island,” he said.

Amore is expected to face Republican Pat V. Cortellessa, a Cranston resident who received 32.5 percent of the vote when he lost to Democratic Secretary of State Nellie M. Gorbea in 2018.

The Senate approved similar legislation, also filed by Leader McCaffrey on behalf of the Attorney General, in 2021.

“Workers should receive the pay and benefits they deserve – and have earned – from the people who employ them,” said Senator McCaffrey. “Wage theft and employee misclassification are very real problems that affect workers, taxpayers and responsible business owners. Attorney General Neronha’s bill is an important step to more appropriately penalize, and hopefully deter, this behavior.” Read more here.

Kicking off the Rt 146 project while providing good paying union jobs it will also provide a much needed makeover for a highway connecting Northern Rhode Island. View pictures here. 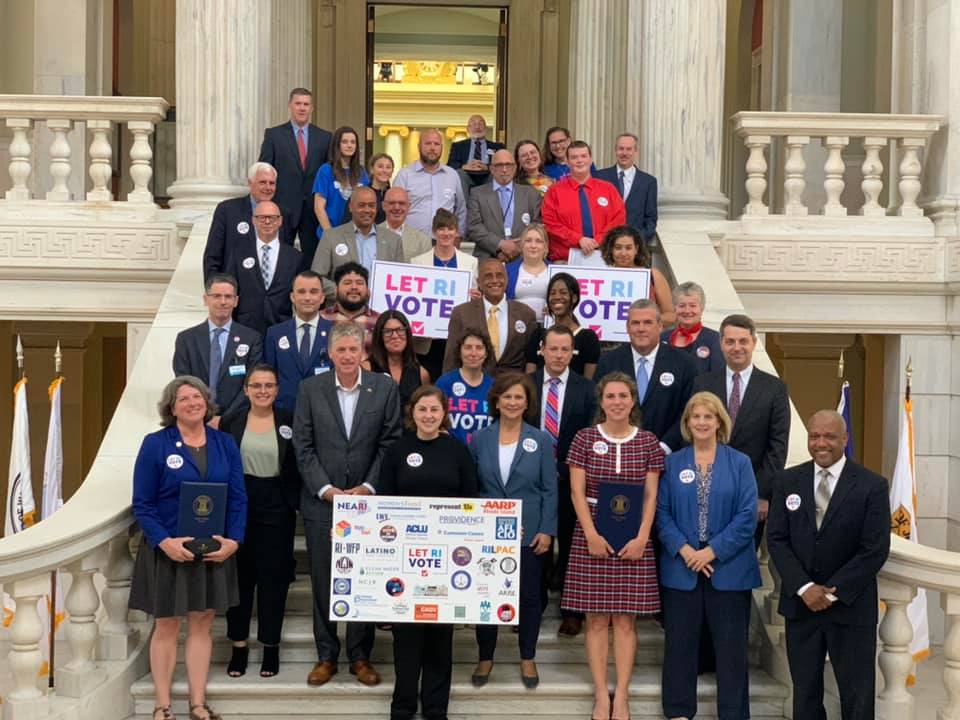 A coalition of over 40 community organizations supported the Let RI Vote Act, sponsored by Rep. Katherine Kazarian and Sen. Dawn Euer. Advocates sent over 30,000 letters of support to legislators at Rhode Island House of Representatives and Rhode Island Senate in one of the largest grassroots mobilizations for voting rights in modern Rhode Island history!

The Let RI Vote Act removes the requirement that mail ballots be accompanied by the signatures of two witnesses or a notary and requires all municipalities to provide secure mail ballot drop boxes; these practices were used successfully during three statewide elections in 2020.

It also requires the state to create a secure online mail ballot application system, conduct more frequent voter roll cleanup, provide a multilingual voter hotline, and shorten the deadline for voters to request a braille ballot, among other improvements. The law finally recognizes that the in-person emergency mail ballot process is called ‘early voting’, which was an incredibly popular option for voters in 2020. Read more here.

Even though the history of the industries that make up our union is long and proud, today marks the anniversary when the Retail Clerks International Union & the Amalgamated Meat Cutters & Butcher Workmen Union merged, creating the UFCW.

With warm weather here, many of us, including dads, will be outside repairing, and improving our homes, cars, boats, you name it. So why not buy the dad in your life some brand new tools from companies that treat their workers fairly and give them a voice on the job? It’s a great way to say “Happy Father’s Day” while supporting good jobs. Choose from our exclusive list below and vote with your wallet this Father’s Day. See list here.

Description: The George “Bing” Fogarty Foundation was established by family and friends to carry on “Bing’s” legacy of charitable works and helping others. For more information, contact Phil Fogarty at gphilfog3@cox.net or by telephone at (401) 932-3642.

The Fight for Equal Rights During WWII: The Story of Boilermakers Local 308 and Jim Crow Unions with Patrick Crowley