Providence, RI – The last few days have once again reminded us of the terrible effect of gun violence plaguing our country. Nineteen children and 2 teachers were murdered in Uvalde, TX, while anguished parents helplessly waited outside of the school building while the shooting was taking place. Only days earlier, a racist gunman shot and killed 10 people and wounded 4 workers while they shopped and worked at a supermarket in Buffalo, NY. Our hearts are broken, once again, by these senseless acts of utter cruelty.

Enough is enough. As a labor movement, as workers, as parents, and as men and women of good conscience, we must act. Therefore, the Rhode Island AFL-CIO has made the decision to support 3 pieces of legislation currently pending in the General Assembly.

George Nee, President of the Rhode Island AFL-CIO said: “These measures will not heal the fractures in our hearts caused by more tragedies involving guns in this country, but it is a start. We have long advocated for workplace safety, for the simple right to go to work with the simple expectation of being able to get home safely.”

Patrick Crowley, Secretary-Treasurer of the Rhode Island AFL-CIO said: “Ending the scourge of gun violence is a labor issue, and as the voice for working men and women in Rhode Island, we must speak as loud as possible when our brothers and sisters, and the children in their care or the people that they serve, are taken from us by preventable violence.”

The Rhode Island AFL-CIO came to this decision after speaking directly with the leaders of our largest affiliate unions and polling the members of the Federation’s executive board. Therefore, we urge the General Assembly act, and call on Governor McKee to sign, these commonsense measures. 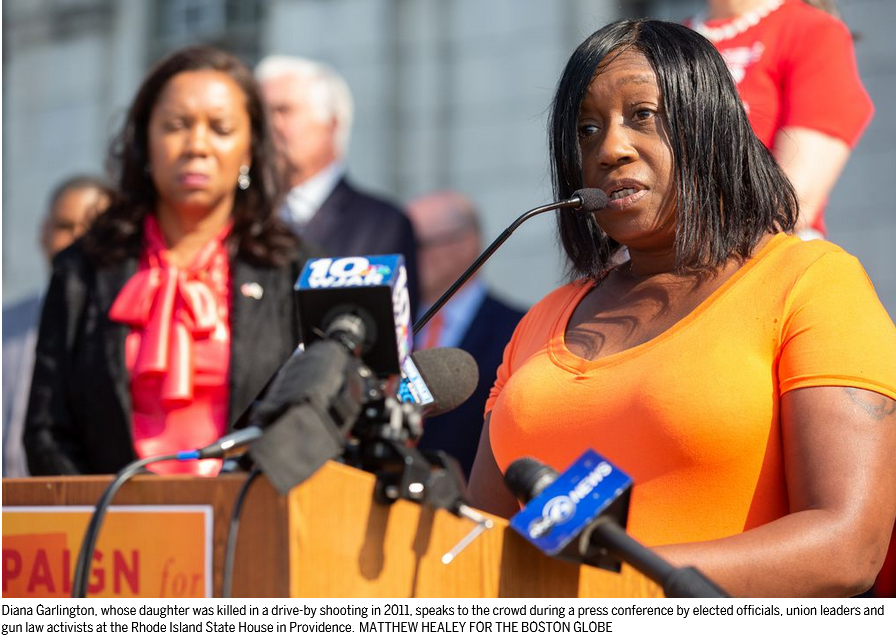 ‘When our children die, we die too. Enough is enough,’ said Diana Garlington, a Providence resident whose 21-year-old daughter was killed in a drive-by shooting in 2011.

PROVIDENCE — In a powerful push prompted by the school shooting in Texas and the racist shooting in Buffalo, top state officials, legislators, and union leaders stood on the State House steps on Tuesday, calling for Rhode Island to ban assault-style weapons and high-capacity magazines.

But it was Diana Garlington, a Providence resident whose 21-year-old daughter was killed in a drive-by shooting in 2011, who delivered some of the day’s most poignant statements.

“When our children die, we die too,” she said. “Enough is enough.” Read more here.

PROVIDENCE – Citing the well-documented crisis in mental health care in Rhode Island, Butler Hospital employees on Wednesday staged an informational picket calling on state government to use funds from the American Rescue Plan Act to expand the hospital’s ability to treat the increasing number of people in need.

“Our patients need us now more than ever, but the system is failing them,” emergency department nurse Ian Lacombe, a Butler employee for two decades, said in a news release from Service Employees International Union Local 1199NE, which represents some 650 workers at the hospital.

“In the [Emergency Department], we have had days where people must wait in their cars to access services, as our screening area is overly full,” Lacombe said. “It is not unusual to have a wait time measured in hours before you can even walk into triage. At the same time demand has spiked, staffing is the worst I have ever seen. Higher demand and COVID’s effect on staff has led to more hours with less people working, a perfect storm for high burnout.” Read more here.

Starbucks workers and allies held an informational last week to show their support for unionizing Starbucks workers at the 25 Pace Blvd, Warwick, RI, location Show your solidarity, tip your local barista and tell them to vote #UnionYes

Organizing and showing support will always be necessary for our community to guarantee fair wages and working conditions to all workers! We hope workers in Starbucks Warwick, get to unionize and become the first in the state! Thank you @riaflcio,@climatejobsri, @riilsrmedia. 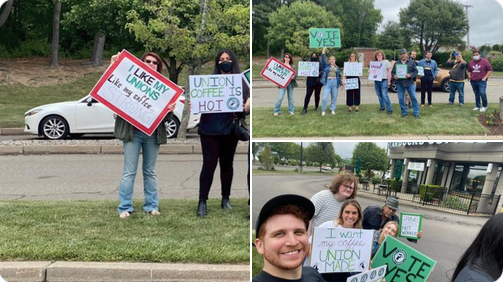 Please join us for an informational picket to support Starbuck Workers!

Last week we held a picket to bring attention to the unionizing workers’ upcoming election date on June 14th and to show our support to the Starbucks baristas inside.

We want to build on that momentum and have a large labor turn out so that they know that the Rhode Island Labor Movement welcomes the unionizing Starbucks workers. More information attached.

What to do:
– Show up
– Make a sign to show your support
– Drive by and honk your horn
– Order a coffee and tip heavily (We are not boycotting Starbucks! We are supporting the
workers)
– Tell your friends and coworkers
SIGNS:
– Messages of solidarity
– Promote tipping the Baristas
– Focus on the workers
– Say “welcome” to our newest union organizers

On April 6, 2022, Starbucks workers at the Pace Blvd store in Warwick became the first store in
Rhode Island to file a petition to unionize. To date, 68 Starbucks stores nationwide have
voted to unionize and 240 stores have begun the process towards unionization. Only four
stores have voted against the effort to unionize.

In Rhode Island, ballots have been released to the Pace Blvd Starbucks workers. They will
submit their votes over the next couple of weeks, with the ballot count on June 14, 2022.
Since April, people from all over Rhode Island have been showing their solidarity. When
ordering at the Starbucks stores, they have been given different names to be written on their
coffee cups, such as “Union Strong”, “Solidarity”, and “Union Yes”. They have also made sure to
give cash tips, marking the bills with messages that echo the need for a union, with stickers
stating “This Payment Made Possible By Union Wages”.

The unionizing workers feel very confident about voting to unionize. Let’s get them across the
finish line!

The Providence Journal: Workers at Macy’s in Warwick and 4 Massachusetts locations vote to authorize a strike

WARWICK — Unionized workers at five Macy’s department stores, including the one at the Warwick Mall, have voted to potentially strike as they continue negotiations with the retailer over a new contract.

Union negotiator and sales colleague Anita Hovey said workers want Macy’s to bring up the minimum pay at the Warwick store to at least $15 an hour, after the chain announced the higher starting pay for nonunion stores in January.

“We got a best and final offer from Macy’s last Friday and we had about 250 people come up and vote last Sunday, and they did take a strike vote,” she said.

The stores in Warwick, and Braintree, Peabody and Natick, Massachusetts, are under one union contract. A fifth store, in Boston, is under a different contract, Hovey said. Workers at all five are represented by the United Food and Commercial Workers Local 1445.

Union has authorization to strike

While the union now has authorization to strike, the final decision hasn’t been made. Employees plan to hand out pamphlets at the store in Warwick on Friday and at the store in Boston next Wednesday. After the Wednesday demonstration, they will probably know if a strike will happen, Hovey said.

“We’ve gone back to the bargaining table, but we’ve reached an impasse. And Macy’s says they’re negotiating in good faith, but they’re not giving us any counteroffers,” she said.Read more here. 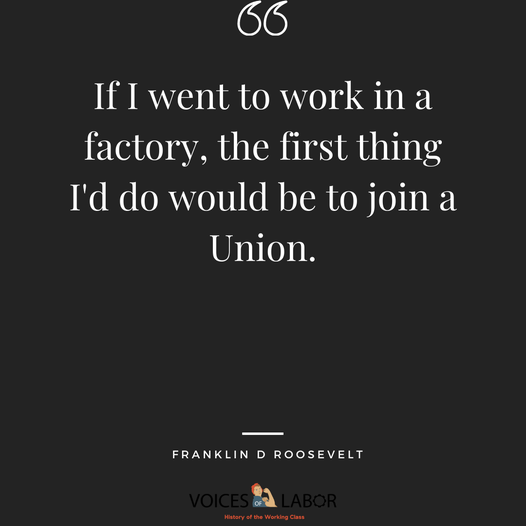 Fighting for freedom at home and abroad: The story of Boilermakers Local 308 and the
end of Jim Crow unions

Description: The George “Bing” Fogarty Foundation was established by family and friends to carry on “Bing’s” legacy of charitable works and helping others. For more information, contact Phil Fogarty at gphilfog3@cox.net or by telephone at (401) 932-3642.

Due to the understaffing and the pandemic, massive backlogs for vital assistance are keeping Rhode Islanders from accessing the critical services that DHS provides. Food assistance, child care, medical care and income supports are but a few of the necessary programs that are being affected by this lack of urgency to fill these support positions.

The state agency has roughly 150 unfilled positions, and in some cases it has taken over 600 days for them to post vacant positions to be filled. Meanwhile workers are feeling unsupported and overwhelmed as they attempt to help Rhode Islanders access state benefits.

What can we do to help?