Governor McKee, Michael Sabitoni, and George Nee at topping off event of construction project at Bally’s Twin River on February 3.

On February 2nd Climate Jobs Rhode Island, along with experts from the Worker Institute at Cornell University launched a report outlining a comprehensive climate jobs action plan for RI to meet its emissions reduction goals set by the Act on Climate. This report creates a roadmap to put RI on the path to building an equitable, worker-centered, and resilient clean energy economy. Read the full report HERE.

NATIONWIDE — A new report released today by climate and labor experts at Cornell University in collaboration with the Climate Jobs Rhode Island Coalition outlines a comprehensive climate jobs action plan to put Rhode Island on the path to building an equitable and resilient clean-energy economy.

The report lays out a series of wide-ranging policy recommendations to transition the Ocean State’s building, school, energy, transportation, and adaptation sectors to renewable energy with the strongest labor and equity standards. Core provisions of the plan include decarbonizing the state’s K-12 public school buildings, installing 900 MW of solar energy statewide, 1,300 MW of offshore wind energy, and modernizing the state’s electrical grid by 2030.

“Rhode Island is in a unique position as a state, in 2019 it had the lowest energy consumption per capita across all the United States. Rhode Island can use climate change as an opportunity to eliminate carbon emissions, increase equity, and create high-quality jobs that support working families and frontline communities,” says Avalon Hoek Spaans, Research and Policy Development Extension Associate for the Labor Leading on Climate Initiative at the Worker Institute, Cornell ILR School and one of the authors of the report.

The Providence Journal: Number affected by RIPTA breach rises to 22,000; UnitedHealthcare is no-show at hearing

UnitedHealthcare, the state’s former health plan administrator, was a no-show at a Monday hearing about how thousands of workers’ data was stolen during a breach of Rhode Island Public Transit Authority’s computer networks.

But the oversight committee hearing did yield a number of revelations — among them, that the breach affected about 22,000 people.

Why has the number of people impacted by the breach grown?

Letters mailed out to victims in December indicated that the breach affected about 17,000 Rhode Islanders. The new, larger figure incorporates everyone impacted by the breach — including both past and present state workers and their beneficiaries.

Of the roughly 22,000 individuals affected, about 5,015 were RIPTA employees whose personal health information was in the file, officials said on Monday. The other 17,000 had received health care through the state’s plan but were not employed by RIPTA. Read more here.

“Congratulations to everyone who stood strong at this location throughout this process,” Matthew Taibi, Secretary-Treasurer of Teamsters Local 251. “These workers are part of a grassroots movement of school bus workers who are demanding that they be respected for the essential work they do for communities throughout the state and compensated accordingly.”

The newest collective bargaining agreement includes a number of improvements that bring the drivers up to the wage and benefit standards enjoyed by other First Student workers represented by Local 251. The victory is the latest in a string of recent successes for Teamster school bus workers in the Ocean State. Last week, Durham Smithfield workers ratified their first contract. Within the past three years, school bus workers in Pawtucket, Warren, Portsmouth, Coventry and East Providence have all ratified agreements with Local 251 that have significant improvements. On the legislative front, Rhode Island Teamsters successfully lobbied for the passage of H6118A and S635A, which improves job protections for school bus workers. Read more here.

Striking Johnson Brothers of RI drivers have been warning the community about the unsafe and unprofessional behavior of the SCAB replacement workers since they began their Unfair Labor Practice strike on May 26. 2021.

SCAB replacement drivers have been filmed driving down one way streets the wrong way, cutting across several lanes on the highway to take exits, driving down streets where trucks aren’t allowed, hitting low bridges, crashing into vehicles on streets and in parking lots, driving over bridges with overweight trucks, running red lights blowing through stop signs, parking in handicapped parking spots and in front of fire hydrants.

These SCAB replacement drivers continue to defy the laws and apparently couldn’t care less about the safety of the general public. Maybe they think by driving in unmarked trucks nobody will know who they are. But WE know!!

These pictures show how Johnson Brothers of RI trucks were operated this week after the major snowstorm. Will North Kingstown police or other police departments finally pull these unsafe drivers and trucks over before someone gets killed? Read more here.

SEIU Local 580 and R I Council 94 AFSCME Local 2882 held a press conference yesterday to call on state officials to immediately fill all 78 DHS frontline vaccancies to end delays to critical services for RI’s most vulnerable. 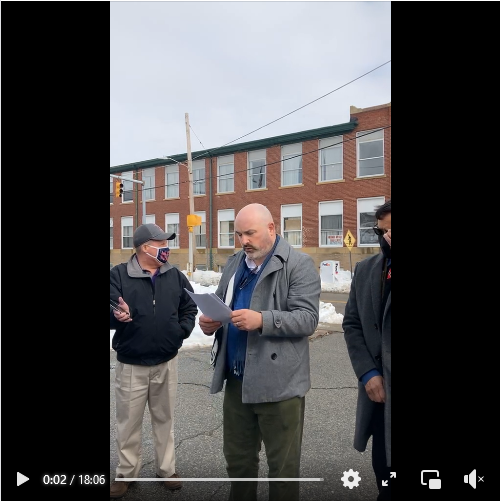 It’s been one year since the Climate Jobs RI coalition launched an initiative to transition R.I. towards a net-zero emission economy by the year 2050! We are so proud to stand with the Labor and Environmental movements as we work together to build a green economy!

CDC, OSHA and the Harvard TH Chan School of Public Health all recommend Portable Air Cleaners [PACs] to reduce airborne transmission of COVID-19 in buildings. Portable high-efficiency particulate air (HEPA) fan/filtration systems may be particularly helpful when additional ventilation with outdoor air is not possible. A summary of some of the key consideration in selection and application of PACs will be provided.

Register in advance for this meeting:

Seating is limited and on a first come first serve basis.  The maximum is 15 stewards.  If you are interested in attending the Steward Training Workshop, please reply by Monday, February 6, 2022, with the names and emails of the stewards directlyto Lorina Hart at lharte@riilsr.org or by telephone 401-463-9900.”###
TEAMSTERS, Local 251SOLIDARITY WITH JOHNSON BROTHERS WORKERSPlease visit the picket line and show Johnson Brothers that workers stick together and will not be treated like second-class citizens. Picket lines are at:
Johnson Brothers of Rhode Island 120 Moscrip Ave North Kingstown RI 02852 Key times are 7:30-8:30 a.m. Let Johnson Brothers know about your concerns at: 651-649-5800 (Corporate) or 401-583-0050 (Rhode Island) Donations can be made to: Teamsters Local 251 Strike Fund, 121 Brightridge Ave. East Providence RI 02914

Show host Autumn Guillotte sits down with Erica Hammond and Mike Roles from Climate Jobs RI, Priscilla De La Cruz from the Audubon Society of Rhode Island, and Justin Kelly from the International Union of Painters and Allied Trades, District Council 11, to discuss a very exciting push to decarbonize public school buildings by shifting them from fossil fuels to renewable energy sources.

–       How to Start a Union: https://rhodeislandaflcio.org/contact-a-union-organizer