The Rhode Island AFL-CIO brought together labor leaders from across the state to discuss how RI could best deploy The American Rescue Plan Act funds to help working class Rhode Islanders, check them out here. 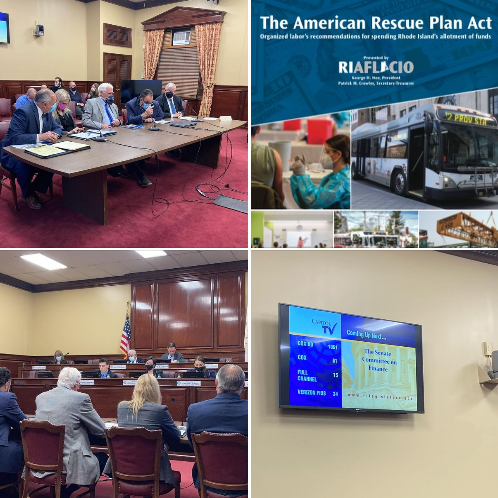 School bus drivers for the Scituate, Bristol Warren and Pawtucket school districts have voted to authorize a strike, according to Teamsters Local 251.

“These essential workers haven’t received a raise during the height of the pandemic, as the industry has seen a shortage of workers,” Matthew Taibi, secretary treasurer for Local 251, said in a statement.

Bus drivers in Scituate voted to unionize last year “and have patiently been waiting for a first contract” ever since, Taibi said. Other districts are in the midst of negotiations.

First Student, which employs the drivers, has “stalled in bargaining with Local 251 and has frustrated everyone involved,” Taibi said. “This frustration certainly doesn’t help with the worker shortage in the industry, as qualified workers have sought other opportunities.”

“First Student is negotiating with Local 251, and we are hopeful that a fair and equitable agreement can be reached soon,” Frank McMahon, a spokesman for the company, said in an email. “In the meantime, we remain committed to providing the best transportation service possible to the families we serve.” Read more here.

Dave Helminski will drop off his last package for United Parcel Service Inc. on Christmas Eve 2022 and retire after four decades as a driver in Chicago. He joined UPS after four years in the Marine Corps and a yearlong stint installing carpet. He put in a few years loading trucks, then became a driver and was set for life. After Helminski drops off that last package, he’ll have pensions that provide almost the same $100,000 a year he makes now. “I came out of the lower middle class, and I’m living the dream,” Helminski says, wearing a face covering with the Marines emblem as he heads home from his shift at a large UPS facility in the northern suburb of Palatine.

Helminski’s dream industry has lately become more of a nightmare scenario at rival FedEx Corp. The massive labor shortage that’s rocked the U.S. since the pandemic and disrupted long-established employment relationships hasn’t had much impact on UPS, which pays its unionized drivers the highest wages in the industry. That’s helped it maintain a stable workforce and rising profits throughout the current disruptions. Meanwhile, lower-paying, nonunionized FedEx racked up $450 million in extra costs because of labor shortages. And while UPS easily beat earnings expectations and predicted a rising profit margin in the U.S. for the fourth quarter, FedEx signaled that its profit margin will fall further. Read more here.

Test Your Knowledge on Labor Unions

Most people know that unions improve wages and benefits for workers, but do you know just how beneficial they really are? Take our Quiz of the Week to test your knowledge on the state of unionization in the United States.

Labor 411: Fall Warmers for the Season

Feel that chill in the air? That’s the truest sign that fall has fallen, and while most of us are not yet experiencing the chill of winter, it’s still a great time to grab a favorite blanket, a hot drink or a comforting bowl of soup to embrace the season. The fall warmers listed below are made by ethical companies that treat their workers fairly and give them a voice on the job.

Stay toasty and let’s all help build a stronger America.

UPCOMING EVENTS:TEAMSTERS, Local 251SOLIDARITY WITH JOHNSON BROTHERS WORKERSPlease visit the picket line and show Johnson Brothers that workers stick together and will not be treated like second-class citizens. Picket lines are up 24 hours a day at: Johnson Brothers of Rhode Island
120 Moscrip Ave.
North Kingstown RI 02852
Key times are 6:30-8:30 a.m. and 4-6 p.m.
Customer banners are typically on Wednesdays from 4-6pm. Contact us to participate.
Johnson Brothers of RI Donations can be made to: Teamsters Local 251 Strike Fund, 121 Brightridge Ave. East Providence RI 02914