Yesterday was the first day of Hispanic Heritage Month and we want to honor Cesar Chavez, a revolutionary civil rights activist and co-founder of the National Farm Workers Association (@ufwupdates) and inspiration to RI AFL-CIO’s President George Nee.

RI Painters Union Twitter:@GoIUPAT DC 11 in the house in Johnston to build a new Amazon facility. Union careers for local union @ri_trades are built one project at a time. #1u#apprenticeships#UnionStrong

More pictures from the above rally yesterday in Johnston to build a new Amazon facility.

LIUNA New England Facebook: Today, our esteemed political leaders joined together to unanimously support the Bipartisan Infrastructure Framework that would bring over $2 Billion Dollars to the State of Rhode Island and begin fixing our state’s crumbling infrastructure. We thank Senator Jack Reed, Senator Sheldon Whitehouse , Congressman Jim Langevin , Congressman David Cicilline , Rhode Island Governor Dan McKee , Rhode Island Department of Transportation Director Peter Alviti Jr. and RI Building & Construction Trades Council President & RI Laborers District Council Business Manager Michael F. Sabitoni, for their solidarity in calling for the passage of this historic legislation and their ongoing commitment to enhancing the State of Rhode Island’s roads and bridges. “The Bipartisan Infrastructure Framework will deliver a once in a lifetime opportunity for both LIUNA members and their families nationwide as well as for the hard working men and women of the Rhode Island Building Trades. Let us make our mark in union history by getting this legislation passed” – Michael F. Sabitoni #BuildBackBetter#BipartisanInfrastructureFramework#LIUNA

BREAKING: SEIU 1199 NE caregivers and other frontline staff at Women and Infants Hospital are holding an informational picket today to demand an end to the staffing crisis! #safestaffing 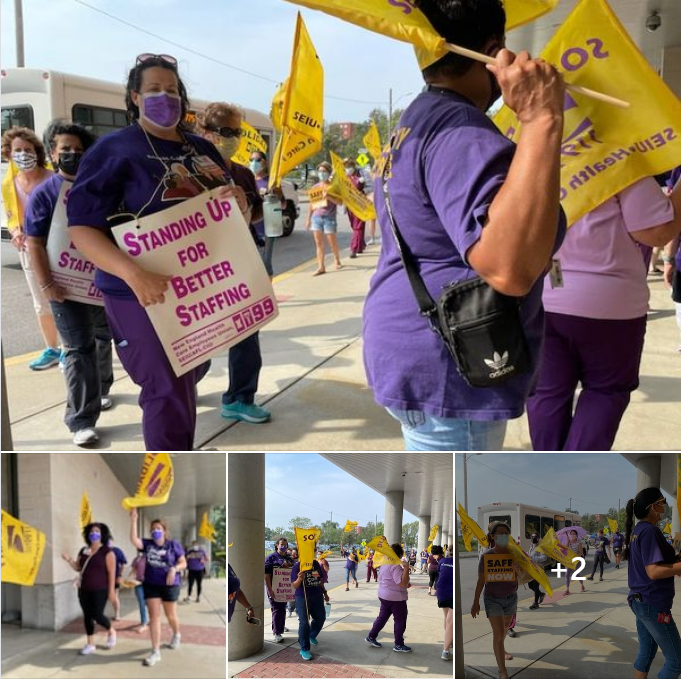 Members of the United Nurses and Allied Professionals Local 5110, which represents the nurses at Our Lady of Fatima, voted “overwhelmingly” in favor of the contract on Sept. 2, according to the union.

The retroactive agreement began on July 30 and extends through July 30, 2024.

“We are proud to have reached an historic agreement that provides our nurses with job security, wage increases, a cost of living adjustment, a freeze on health insurance costs until 2024, student debt relief for new nurses, and most importantly, a first-of-its kind in Rhode Island staffing grid that ensures the safety of patients and nurses through safe nurse-to-patient ratios,” said Local 5110 President Laura McQuesten. Read more here.

AFL-CIO: Watch: Secretary Walsh Commends Partnership Between the
AFL-CIO and the United Way

The AFL-CIO and the United Way are honoring the 80th year of our partnership. We celebrated with a short video from Labor Secretary Marty Walsh (LIUNA), who said: “The power of this partnership has been clear during the pandemic. The AFL-CIO and the United Way’s labor liaisons have worked with local unions to support disaster relief efforts and conduct hundreds of food drives all across this country. They’ve helped thousands of families get food and also get connected to a host of resources—housing support, job training programs, child care and much more.” President Shuler and United Way Worldwide Interim President and CEO Neeraj Mehta opened the video. Watch video here.

On September 21, hear from union leaders in the climate jobs movement about how we can create millions of union climate jobs and build a renewable, worker-centered economy at the scale that science demands.

Register for the Climate Jobs Summit on September 21, 2021 here: https://climatejobs.ilr.cornell.edu/

TEAMSTERS, Local 251SOLIDARITY WITH JOHNSON BROTHERS WORKERSPlease visit the picket line and show Johnson Brothers that workers stick together and will not be treated like second-class citizens. Picket lines are up 24 hours a day at: Johnson Brothers of RI 120 Moscrip Ave North Kingstown RI 02852 Key times are 7:30-9 am and 4-6 pm.

Co-hosts Erica Hammond and Autumn Guillotte sit down with CLUW RI’s President Desiree Leclair to discuss what’s on the chapter’s agenda for the fall and into the new year. This fall the Coalition of Labor Union Women RI Chapter will be organizing a membership drive to expand their outreach throughout Rhode Island’s Labor community.

For viewers who are unfamiliar with the Coalition of Labor Union Women, President Leclair gives a brief background on the national coalition as well as the history of this iteration of the state’s chapter, formed by former president, Maureen Martin. During this segment the group will discuss the importance of a chapter presence in each state, the benefits of being a member, and the impact expanding the coalition would have on workers and Rhode Island Labor as a whole. Tune into this segment to learn more about how you can get involved and how you can find CLUW RI on Facebook, Instagram, and Twitter.