In exchange for the no-bid contract, both companies have committed to creating more jobs in the state.

Waste workers for Veolia Water in Fall River, Mass., have voted overwhelmingly to ratify an excellent three-year agreement after a hard-fought campaign to win respect at the bargaining table. The new contract raises wages, secures health and welfare, provides a retention bonus and other improvements for the members of Local 251 in East Providence, R.I.

“We’ve always been willing to bargain and work with the company on certain aspects of the contract, but this time it was different, and we were united to win a fair contract,” said Howard Paine, an 11-year maintenance worker at Veolia Water and steward for Local 251. “When they realized we were serious about striking, the company began to take us seriously. I am grateful to the guys for their solidarity. We all stuck together and it’s the best contract we’ve ever had.”

Paine noted that he and his co-workers refused to accept Veolia Water’s concessions, which included switching from the Teamsters Health and Welfare plan to the company’s inferior health care plan. Read more here.

Members in Fall River, Massachusetts voted overwhelmingly to ratify a strong 3-year agreement after a hard-fought campaign to win respect at the bargaining table!

The new contract raises wages, secures Teamster health and welfare, provides a retention bonus and other improvements for the members.

Paige Clausius-Parks is a senior policy analyst at Rhode Island KIDS COUNT. Linda Katz is the policy director at the Economic Progress Institute.

While many of us may feel relieved with increasing numbers of vaccinations in RI and the gradual return to our previous lives, many low-income Rhode Islanders continue to face deep economic hardship. This is especially true for Black, Indigenous, and People of Color (BIPOC), children in low-income communities, and families headed by women. Historical policies rooted in racism — policies that have barred and continue to limit access to wealth-producing opportunities — have left these communities disproportionately exposed and vulnerable to the COVID-19 pandemic and to the subsequent economic downturn.

Rhode Island Works, our state’s version of the federal Temporary Assistance for Needy Families (TANF) program, is designed to help very low-income families meet their basic needs by providing cash assistance and work supports, including employment services, SNAP benefits, health insurance, subsidized childcare, and a small annual clothing allowance for children. The maximum monthly benefit for a family of three is $554 per month. This benefit amount provides $6 per person per day and has not been increased in 30 years. Read more here.

Take 60 seconds to sign up to send a pre-filled  email (option to edit) that will seamlessly send automated email to your state senator and state representative.

DCYF is understaffed and underfunded putting the lives of DCYF children at risk. Support DCYF to get accredited.

In 2010, legislation was passed  “to provide the resources for the department of children, youth, and families to meet, achieve and sustain accreditation by the Council on Accreditation” and “the general assembly shall appropriate sufficient funds for expenses associated with achieving initial COA accreditation and subsequent re-accreditation with said funds being placed in a restricted receipt account to be used solely for this purpose.”

In 2010, this law was voted for by every legislator and the Governor. However, the law was not implemented.

Since this time there have been child fatalities and a Children’s Rights class action lawsuit that exposed our broken child welfare system that highlighted children falling through the cracks to due excessive caseloads, being understaffed, amongst other systemic failures. A lawsuit settlement agreement mandated by a federal consent decree to overhaul the DCYF system. At this time 9 out of 12 benchmarks of the consent decree have still not been met despite years gone by. Read more here.

UA Local 51Facebook:
Local 51 is proud to introduce the graduated classes of 2020 & 2021! Congratulations to all the Apprentices who finished their schooling! Thank you to the family and friends who joined us for a fun filled evening at Kempenaar’s Clambake Club! We would also like to thank the JATC committee for their continued dedication to our Training program.

Vox: Poll: A majority of voters support the PRO Act 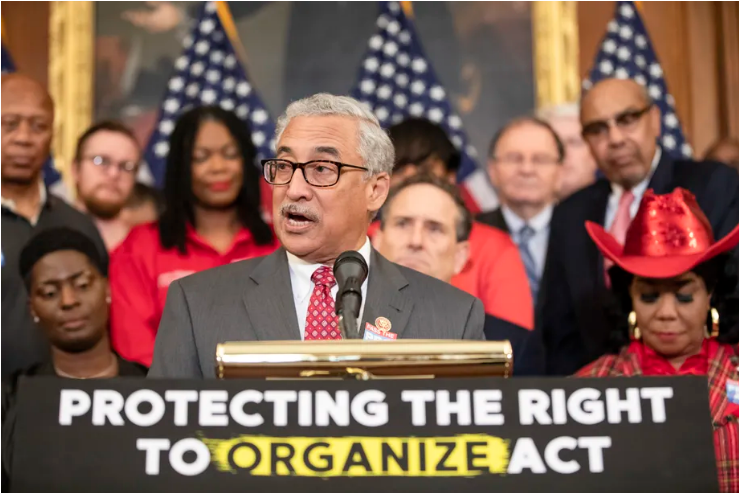 The Protecting the Right to Organize (PRO) Act seems unlikely to succeed in the Senate due to a lack of Republican support — but it has the support of the majority of likely voters, according to a new poll from Vox and Data for Progress.

The act, a sweeping labor rights bill, would strengthen unions through overriding Republican-led “right to work” state laws, which impede unions’ abilities by allowing workers to join without paying dues. It would also penalize companies that restrict union activity, and would bestow independent contractors — such as drivers for Uber and Lyft — with the right to organize and collectively bargain.

The bill passed the House in March, with the support of just five Republicans and all but one Democrat. It has the support of President Joe Biden, and is part of his American Jobs Plan. Now, the bill faces long odds in the Senate, where all 50 Democrats and 10 Republicans, absent filibuster reform, would need to approve of the legislation for it to pass.

UPCOMING EVENTS:
Teamsters, Local 251
SOLIDARITY WITH JOHNSON BROTHERS WORKERS
Please visit the picket line and show Johnson Brothers that workers stick together and will not be treated like second-class citizens. Picket lines are up 24 hours a day at: Johnson Brothers of RI 120 Moscrip Ave North Kingstown RI 02852 Key times are 7:30-9 am and 4-6 pm.

Coming up on Labor Vision … The Labor Vision at Home Edition continues. Check out the latest episodes on our website: http://www.LaborVisionRI.org.