SOUTH KINGSTOWN – State coastal regulators have signed off on the South Fork Wind Farm project, providing the number of turbines is reduced and a compensation fund for local fishermen is set up.

The R.I. Coastal Resources Management Council’s 5-2 vote on Wednesday night ends a monthslong series of failed negotiations between the developer and fishing industry representatives, whose dispute centered on details of how the industry should be compensated for losses. Even on Wednesday, the latest CRMC staff recommendation attempting to strike a compromise between the two sides appeared to drive them further apart.

South Fork is being jointly developed by Danish company Orsted A/S and Boston-based Eversource Energy. Once completed, it will supply electricity to Long Island, N.Y.

The 132-megawatt wind farm slated for federal waters off the coast of Block Island still requires final approval from the U.S. Bureau of Ocean Energy Management. While the process for leasing and reviewing major offshore wind turbines largely rests at the federal level, the CRMC through its Ocean Special Area Management Plan gets a say for wind farm projects within a certain distance of the state coastline. Compensation is intended to offset losses to the fishing industry from the construction and operation of the projects. Read more.

Beat the Heat: Elements of a Heat-Healthy Program

NWS Northeast Region issues heat advisories when the heat index is forecast to reach 95 degrees for any amount of time on two or more consecutive days or 100 degrees for any amount of time on a single day. Exposure to heat combined with physical activity and other factors in the environment can increase the body’s temperature and cause heat stress. The body responds to heat stress by trying to stabilize body temperature, a process which can lead to heat strain and more significant impacts like heat exhaustion and heat stroke which can be fatal. Unrelieved heat strain increases the risk for heat-related illness. Heat stress and heat strain can also increase risk of injuries from dizziness or falls.

Many factors impact heat stress and heat strain, including air temperature, humidity, exposure to radiant sources and equipment, clothing, physical exertion, and hydration. This is a simple checklist to plan ahead but for more detail and more specific guidance consult the CDC website {www.cdc.gov.} and the OSHA website (www.OSHA.gov.)

Elements of Heat-Healthy Program for Workers:

·       Regular hydration (fluid intake) is vital. But water and sports drink intake alone will not prevent heat illnesses. It is also important to adjust the work environment and regimen.

·       Take frequent rest breaks. If you work outdoors try to take these breaks inside or in a cool shaded area. The hotter it gets, take more and longer breaks.

View Pictures This may be one of our biggest Facebook posts in regards to the amount of pictures we are sharing. We are very excited and proud of every single one of our recent graduates and they all have two things in common; 1. They were trained by some of the industry’s best and most qualified trainers; the Teamsters! 2. They are all Real Jobs/Back to Work RI participants that are all back on their feet after a long and stressful year during the pandemic. As you scroll through the photos we would have been remiss if we didn’t recognize every one of them individually.

WEST WARWICK — Juana Palacios was making her rounds one afternoon earlier this year, distributing mail on Alden Drive in West Warwick, when she noticed a resident in need of emergency medical attention.

If not for her quick response, the situation may have ended in tragedy.

A letter carrier with the United States Postal Service, Palacios had been making her deliveries on March 3 when she happened across a man laying in his lawn, semi-conscious and foaming at the mouth, according to the local postmaster.

“[She] showed up to a resident’s house to find the customer unconscious on the front lawn in just a T-shirt. It was about 35 degrees that day,” Todd Rekrut, postmaster for the Town of West Warwick, said Thursday. “That person was in some serious distress.”

After getting no verbal response from the resident, Palacios immediately called 911 and then waited until the West Warwick Fire Department arrived to transport him to the hospital, where he later recovered.Read more.

Today the Narragansett Fire Dept. officially welcomed a new firetruck to its fleet by performing a traditional wet down and push-in ceremony. This tradition dates back to the early days of horse drawn equipment when the firefighters upon returning from an alarm  pushed back  the pumper into the fire house bay.

The new Engine-1 is a 2021 Ferrara Igniter pumper. Engine-2 a 2005 Ferrara will be placed in reserve while former reserve Engine-4 a 1997 E-One pumper will be decommissioned and retired – it has served us well for many years and provided one final wet down of the new pumper followed by a blessing from our Fire Chaplain Fr. Marcel Taillon.

Every detail of this new custom built Rescue Pumper was carefully planned to meet the ever expanding needs of our community and the services our firefighters provide.

Thank you to all those NFD members who had a hand in the planning of this truck; special thanks to the residence and citizens of this community who support such projects and continually recognize the great work that the men and women of this department perform day in and day out.

May this fire truck provide the best and safest possible service for our firefighters and the citizens we protect.- Chief Partington 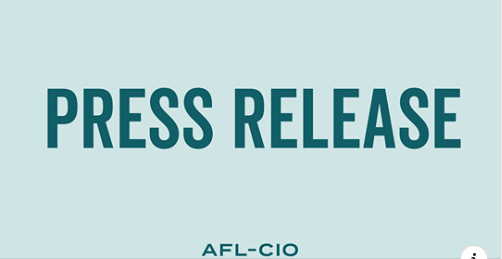 In the nearly two decades since the 9/11 attacks, the working people of the TSA have been tasked with keeping our skies safe. For more than a year, these front-line workers have carried out that duty in the midst of unprecedented threats to their health and safety. Yet time and again, they have been denied their most fundamental rights on the job. Today’s announcement is a critical victory for tens of thousands of hardworking union members and will finally allow TSA workers to bargain for their future like other federal workers. We urge TSA’s leadership to immediately come to the table to reach a fair contract, and we call on Congress to finally codify these workers’ bargaining rights into law by passing the Rights for the TSA Workforce Act.
Contact: Carolyn Bobb (202) 637-5018

AFL-CIO President Richard Trumka joined Bloomberg TV to discuss the latest jobs report and the keys to building back a stronger economy the right way.

Labor 411: How Sweet it is! Union Goodies for National Candy Month

June happens to be National Candy Month and if you’re thinking, ‘Who needs a specially designated month to enjoy the sweet stuff’ you’re not alone. But we don’t make these holidays. We just make sure that people observe them as ethically as possible. You have choices when you peruse the candy aisle and the goodies listed below are made by companies who treat their workers fairly and give them a voice on the job. So eat sweets, buy union, and let’s all work together to build a stronger America. See list.

UPCOMING EVENTS:
Teamsters, Local 251
SOLIDARITY WITH JOHNSON BROTHERS WORKERS
Please visit the picket line and show Johnson Brothers that workers stick together and will not be treated like second-class citizens. Picket lines are up 24 hours a day at: Johnson Brothers of RI 120 Moscrip Ave North Kingstown RI 02852 Key times are 7:30-9 am and 4-6 pm.

Erica Hammond sits down with Kristina Contreras-Fox (RI Coalition to End Homelessness), Alex West (SouthCoast Fair Housing), and Autumn Guillotte (RI AFL-CIO) in our first segment addressing the housing crisis in Rhode Island. RI experienced a major win last month, during Fair Housing month, when legislation addressing housing discrimination based on source of income was signed into law. The group discusses the protection this law will give to Rhode Islanders seeking housing who use a voucher or another valid source of income other than employment income to pay their rent.

The group highlights additional anti-discrimination protections that are already federal or state law in RI that many individuals are unaware of. They will also address two important pieces of legislation that have been introduced in RI this session regarding immigration status, and sexual orientation and gender identity or expression.

In this segment the group also discusses the major lack of housing affecting Rhode Islanders across the state and the impact this has on homelessness, unemployment, job security, and wages. Kristina Contreras-Fox explains exactly how RI can join its neighboring states in establishing a permeant funding stream for affordable housing throughout the state. Don’t miss this segment to learn more about the impact the housing crisis has on all Rhode Islanders.