PROVIDENCE — Rhode Island’s minimum wage would rise from $11.50 an hour today to $15 an hour by Jan. 1, 2025, under legislation approved by the House on Thursday.

The final vote was 57-to-16 after a debate in which the House Republican Leader Blake Filippi — who voted nay — acknowledged he cannot imagine how anyone can survive on the current $11.50 an hour.

“But I also know this will hurt businesses,” he said, blaming federal monetary policy “that creates money out of thin air, gives it to rich people” and drives up “the price of everything.”

The counter-argument from House Majority Leader Christopher Blazejewski: “Putting Rhode Islanders on a path to a $15 hour minimum is good for workers. It’s good for families and it’s good for our economy.”

In his turn, freshman Rep. David Morales said he was raised by a single immigrant mom who had to work “multiple minimum wage jobs just to make ends meet, in terms of covering daily expenses paying for rent.” Read more here.

After a monthslong battle by parents and students to save their teachers from layoffs, Rhode Island College’s Sherlock Center on Disabilities will remain fully funded with no program interruptions for the next two years.

On Monday, House Speaker K. Joseph Shekarchi and Senate President Dominick Ruggerio pledged that the funding would be made available through the state budget, and that the layoff notices issued to more than a dozen teachers in March would be rescinded.

That month, the state’s Department of Education announced that the teachers’ five-year contract was set to expire in June, and that the department was obligated to put the work out to bid.

However, Shekarchi said “there was some ambiguity” on whether the bidding process was in fact necessary, noting that the center’s work is funded through federal assistance, too, which includes “all kinds of guidelines and requirements.” Read more here. 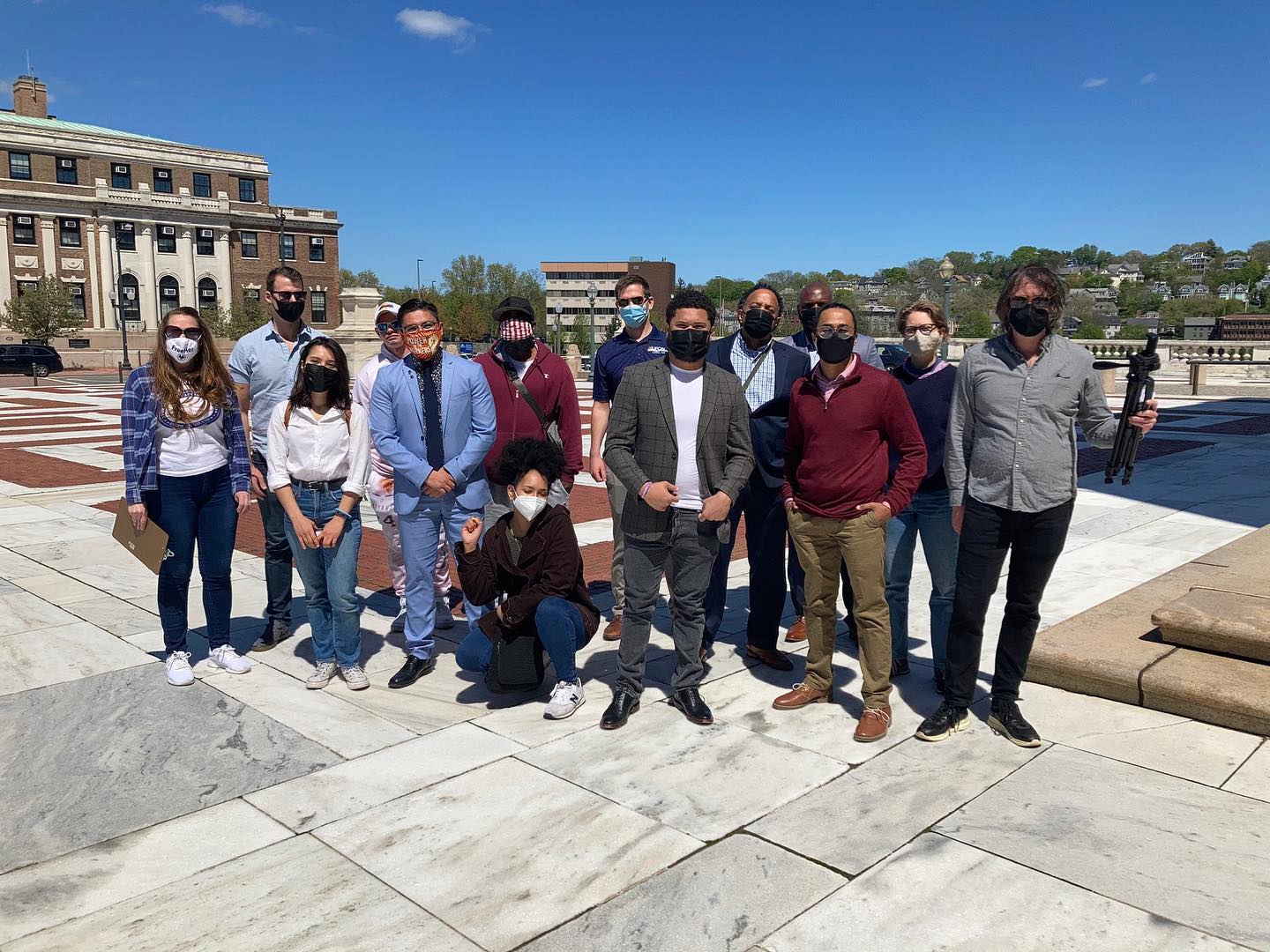 Proud to join this growing coalition today at the press conference at the RI state house! We joined with @reclaimri @blmripac @yeswecannabisri and the Formerly Incarcerated Union in calling for racial, social and economic justice surrounding the expansion of legalized cannabis here in Rhode Island. Elected officials have a unique opportunity to pass legislation that will guarantee equity, ensure fair labor practices, and secure economic opportunities for communities historically affected by marijuana prohibition. Recently, New York passed the most equitable and just cannabis legislation we have seen out of the 17 states that have legalized recreational cannabis. We have the opportunity to not only meet that benchmark but to exceed it here in Rhode Island. We strongly support measures that will provide social equity licensing, automatically expunge cannabis records, create worker co-ops and enact labor peace agreements. These measures will help remove barriers that perpetuate poverty and racial inequities and will open doors for greater economic and social opportunities. We can do this, Rhode Island!

View Death on the Job: The Toll of Neglect report here: aflcio.org/reports/death-job-toll-neglect-2021

In 2019, 5,333 working people were killed on the job and an estimated 95,000 died from occupational diseases, according to the 30th edition of the report released today. That means every day, on average, 275 U.S. workers die from hazardous working conditions. And this was before the devastating COVID-19 pandemic that has been responsible for far too many worker infections and deaths in our country.

“This year, we commemorate 50 years of OSHA and the lives saved by ensuring workers are protected on the job,” said AFL-CIO Secretary-Treasurer Liz Shuler. “COVID-19 has been a stark reminder that workplace safety protections are absolutely critical, and we still have a long way to go. As a country, we must renew our commitment to safe jobs for all workers and invest the resources to make that happen.”

One of the most disturbing statistics is the increase in the death rate for workers of color. The fatality rate for Latino workers increased 14% from 2018 and is the highest rate since 2008. In 2019, there were 1,088 Latino worker deaths, compared with 961 Latino worker deaths in 2018. The majority (66%) of Latino workers who died on the job in 2019 were immigrants. Black workers are also at an increased risk of work-related deaths. In 2019, 634 Black workers died—the highest number in more than two decades. Read more here.

AFL-CIO: Death on the Job: The Toll of Neglect

UComm Blog: Study: The Harm of Right to Work

This post was written by the IBEW Media Department.

Long-shot efforts to roll back right-to-work laws in Michigan and Virginia aren’t likely to level the playing field for working people this year, but a new study provides fresh ammunition for pro-union lawmakers in the fight for repeal.

The study, released earlier this year by the Illinois Economic Policy Institute and the Project for Middle Class Renewal at the University of Illinois at Urbana-Champaign, lays out how, on a number of metrics, states with right-to-work laws come up short. From lower wages to less community engagement, states with these deceptively-named laws are failing working families.

Researchers looked at data dating back to 2008 to determine the impact of right-to-work laws on state economies and worker well-being. What they found paints a bleak picture. The 27 U.S. states that have enacted right-to-work laws saw slower economic growth, lower wages, higher consumer debt, worse health outcomes and lower levels of civic participation than states that do not have such laws. Read more here.

Construction on the nation’s first commercial-scale offshore wind farm is expected to begin this summer, after the Biden administration gave final approval Tuesday to a project it hopes will herald a new era of wind energy across the United States.

The Vineyard Wind project calls for up to 84 turbines to be installed in the Atlantic Ocean about 12 nautical miles off the coast of Martha’s Vineyard, Mass. Together, they could generate about 800 megawatts of electricity, enough to power about 400,000 homes.

The project would dwarf the scale of the country’s two existing wind farms, off the coasts of Virginia and Rhode Island. Together, they produce just 42 megawatts of electricity.

In addition to Vineyard Wind, a dozen other offshore wind projects along the East Coast are now under federal review. The Interior Department has estimated that by the end of the decade, some 2,000 turbines could be churning in the wind along the coast from Massachusetts to North Carolina. Read more here.

Register in advance for this meeting: https://aflcio.zoom.us/meeting/register/tZAvceuvrDkrH9PPZqvRZZ9ah-ju7QsjIHQ-