n updated Union Directory listing union goods and services in R.I. can be found on our website at www.RhodeIslandAFLCIO.org under the “Resources” tab.

Press Release: Climate Jobs Rhode Island Celebrates the Passage of the Act on Climate in the Rhode Island State Senate 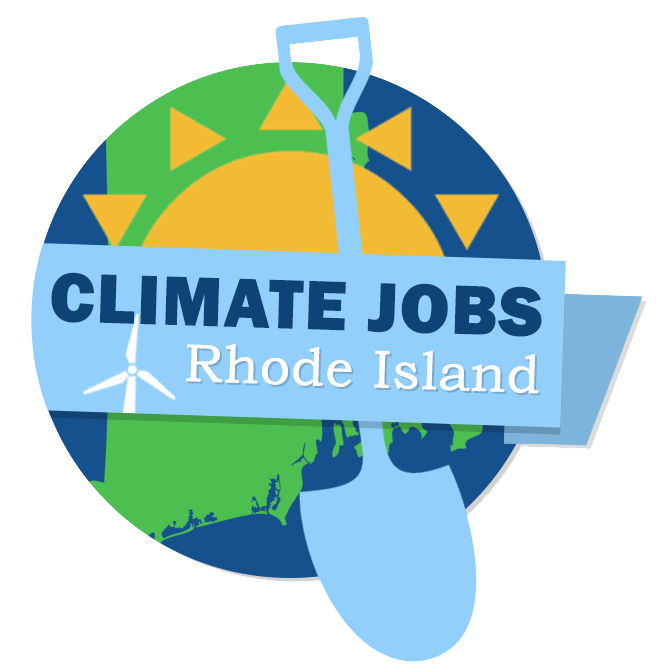 Providence, RI – Climate Jobs Rhode Island, a coalition of environmental and labor organizations, released the following statement after the Act on Climate (2021-S 78 SUB A) passed the Rhode Island State Senate this afternoon.

Climate Jobs Rhode Island commends the vote in the Rhode Island State Senate today to pass the Act on Climate. This important piece of legislation takes meaningful steps to ensuring Rhode Island establishes a just transition to a net-zero emission economy. We applaud Senator Dawn Euer, Chairperson of the Senate Environment and Agriculture Committee, Senate President Ruggerio, Majority Leader McCaffrey, Senate Majority Whip Goodwin, and all of the Senators who voted to support the bill.

Patrick Crowley, Co-Chair of Climate Jobs Rhode Island and Secretary-Treasurer of the Rhode Island AFL-CIO, said, “This bill is a critical step forward for Rhode Island. Our state can lead the way for the rest of the country towards establishing a just transition to a net-zero emission economy centered on racial & social justice and the voices of the people who are most affected by pollution—frontline workers and frontline communities. We encourage the House of Representatives to move quickly to pass the Act on Climate and hope Governor Dan McKee will sign the bill on or before Earth Day this year!”

Priscilla De La Cruz, Co-Chair of Climate Jobs Rhode Island and Rhode Island Director of Green Energy Consumers Alliance, said, “Thank you to the Rhode Island State Senate for taking the next step towards ensuring our state leads by example and holds itself accountable. We need a solid foundation and a comprehensive plan to address the climate crisis. A plan that is economy-wide, enforceable and sets us on a path to a just and equitable transition to a green and sustainable economy that leaves no one behind. Read more here.

President Downey, continued, “During the Pandemic our members have continued to provide high quality services in challenging environments. Local 1350 and Local 1293 are the most ethnically diverse memberships in Council 94. As always, Council 94 will continue to advocate for the provision of strong state/municipal services, and oppose the elimination of middle-class jobs.”

President Downey concluded, “We will review the proposed budget carefully, and look forward to working with Governor McKee to get through the Pandemic.”

In 2019, inspired by teenage Swedish activist Greta Thunberg, youth around the world took action to demand that governments address climate change. While 2020 brought a pandemic that dominated the world’s attention, the urgency of our climate crisis has not abated at all.

That this movement was led by students is significant. The majority of today’s youth are keenly aware that the planet they are inheriting has been abused and is undergoing life-threatening changes, and that humanity needs to reverse the course of this destruction to sustain life as we know it. A 2019 survey by the Kaiser Family Foundation found that 61% of American teenagers say the issue of climate change is very or extremely important to them.

The students of today are the next generation of stewards of this Earth. They are inheriting a planet that needs help and, for those here in Rhode Island, a state that is significantly affected by rising seas. It’s imperative that they are provided accurate scientific information about climate change and that they understand what it means for their future. Read more here.

The Occupational Safety and Health Administration [OSHA] has launched a national emphasis program [NEP] focusing enforcement efforts on work sites where workers have significant documented exposure to SARS-CoV2 the source of the COVID-19 pandemic. National Emphasis Programs (NEPs) are temporary programs that OSHA periodically uses to focus investigations and inspections on particular hazards associated with certain industries. In the past, for example, there have been NEPs directed at silica and silicosis and for amputations. OSHA is not responding to complaints or referrals but is performing preventive maintenance so to speak; OSHA will program inspections and investigations based on information about where and how a targeted hazard persists.

“This deadly pandemic has taken a staggering toll on U.S. workers and their families. We have a moral obligation to do what we can to protect workers, especially for the many who have no other protection,” said OSHA’s Principal Deputy Assistant Secretary of Labor Jim Frederick. “This program seeks to substantially reduce or eliminate coronavirus exposure for workers in companies where risks are high, and to protect workers who raise concerns that their employer is failing to protect them from the risks of exposure.” Read more here.

For the past year, working people have been forced to bear the brunt of this pandemic, paying for failed leadership with our health, lives and livelihoods. This long-overdue relief will help stop the bleeding, but it’s far from sufficient.

Now it’s time to start building toward a just recovery that leaves working people with a louder voice and a stronger hand than ever before. That means delivering unprecedented funding to create a 21st-century infrastructure alongside a new generation of good-paying union jobs. It means delivering the $15 minimum wage that should have been signed into law today. And most of all, it means strengthening working people’s right to organize together by finally passing the PRO Act.

AFL-CIO Twitter:
The #AmericanRescuePlan is one of the most significant pieces of legislation to pass the Congress in recent history. Here’s what it will do:

IUPAT Twitter: 134 years ago today, our union banded together around a shared sense of solidarity even when it seemed impossible. We transformed not just our own lives, but the lives of our families and our communities too. Come build the future with us – http://iupat.org/join-us

Erica Hammond sits down with United Way of RI’s Jennifer Remmes and Brooke Havens to talk about the 2nd Annual 401 Gives event, happening on April 1, 2021. Last year was a huge success and raised over 1.3 million dollars for 366 nonprofit organizations across Rhode Island. The goal for this year is to increase donations and expand outreach to support even more nonprofits throughout the state. If you have missed the registration deadline it is not too late to participate. Go to 401Gives.org for more information and to learn about the organizations who’ve already joined. Don’t miss this segment and remember to mark your calendars for April 1, 2021 at 6am! It will be a day to celebrate all the good happening in our communities. If you have any questions about registering your organization or taking part in the day of giving contact: 401gives@unitedwayri.org