The Council on Elementary and Secondary Education recently approved three new charter schools and expanded three existing schools, adding approximately 6,000 students. Despite the global pandemic and ensuing economic crisis, the state and our communities are going to have to divert money to fund this enormous expansion. The RI General Assembly must intervene to save education programs for tens of thousands of urban public school students who will be harmed by this foolish reckless redirection of public resources.

Charters drain money from school districts. The recently approved expansion will cause as much as $80 million in school funding for 5,500 students to leave Providence schools alone. Central Falls, a district that is already underfunded, will lose critical resources as well. Providence already has 20% of its students attending charter schools. Next year alone, Providence will have to divert an additional $11 million in tuition payments for 591 students attending new or expanded charter schools. Read more here.

PROVIDENCE — The Rhode Island Senate overwhelmingly approved a three-year moratorium on new charter schools and charter expansions, a move that once again stirs up the decades-old battle over school choice.

The 30-to-6 vote Wednesday night followed a passionate debate that pitted critics of charter public schools, almost all Democrats, against a handful of lawmakers who say charters offer parents a successful alternative to failing public schools.

Although charter schools have been slowly expanding, in December the Council on Elementary and Secondary Education granted preliminary approval to a new Boston-based charter school, Excel Academy, which plans to eventually serve more than 2,000 students, many from Providence.

Achievement First charter school, which has long been a lightning rod for critics despite its strong academic performance, was approved to open two more schools in Providence, which would bring enrollment to 5,700 students in 10 years. Read more here.

The minimum wage hike was backed by Senate leaders, who intervened to prevent it being bottled up in the Labor Committee, and top Democratic officials including Gov. Gina Raimondo. Its lead sponsor is Sen. Ana Quezada, D-Providence.

The issue now moves to the House, where Speaker K. Joseph Shekarchi has been non-committal.

Raising the state minimum wage to $15 an hour has been a long-term goal of progressive advocates and labor unions, but small business groups have attacked it as a job killer.

PROVIDENCE – Legislation requiring a set number of hours of daily care for nursing home residents and a pay raise for certified nursing assistants has been approved by the state Senate.

Goodwin’s bill requires a minimum of 4.1 hours of resident care per day, a number that reflects the federal recommendation for nursing homes, and proposes to raise wages for certified nursing assistants to $15 an hour.

The legislation is supported by the union-backed group Raise the Bar on Resident Care, made up of Rhode Island nursing home staff and other advocates. Read more here.

R.I. Painters Union Twitter:
Looking forward to seeing this stadium and all its surrounding development of hotels & shops built 100% union! We need career opportunities, & good paying jobs. What a great thing for working families in Pawtucket & across RI. 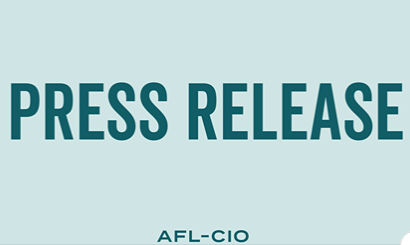 Trumka: “It’s Time for the Party of FDR to Finish What He Started”

Statement from AFL-CIO President Richard Trumka on the introduction of the Protecting the Right to Organize (PRO) Act:

Today, working people are one step closer to freely exercising our most fundamental rights on the job. The PRO Act will strengthen workers’ ability to come together and demand a fair share of the wealth we create—boosting wages, securing better health care and rooting out discrimination.

The past year has laid bare the enormous injustices facing millions of America’s working people who keep our country afloat. We cannot allow those systemic failures to persist for another moment. Working people turned out to vote in record numbers because we urgently need structural change.

We will make our case in every state and every congressional district, to elected leaders across the political spectrum. But make no mistake, this is a test for Democrats. After decades of disappointment, it’s time for the party of FDR to finish what he started. If you stand on the side of America’s workers, you won’t just vote for the PRO Act—you’ll sponsor it, you’ll whip for it and you won’t rest until it’s signed into law.

LaborVision’s Erica Hammond sits down with Jay O’Grady and Erin Cox of LISC Rhode Island, along with Jenni and Dennis Deloach from Joyful Hearts Child Care Center, to discuss an important bond question Rhode Islanders will see on their ballots March 2, 2021. Question 5 is a $15 million bond authorization question which will capitalize the Early Childhood Care and Education Capital Fund.

O’Grady and Cox uncover the truth about existing child care facilities in the state and they highlight exactly what this fund will be used. As child care providers, Jenni and Dennis Deloach talk about what this bond would mean for not only them and many other providers in RI, but most importantly, the young Rhode Islanders they work with every day.

Rhode Islanders can vote from home using their mail ballots until Tuesday, February 9 at 4pm. Voting can be done early, in person, from February 10 – March 1. Or vote on Election Day, March 2, 2021 at your designated polling location. Find your polling location at vote.ri.gov.