Turn to 10 WJAR: Omni Hotel Providence questioned by workers union over use of millions in PPP funds

PROVIDENCE, R.I. (WJAR) — The union representing employees at Omni Hotels & Resorts has accused the company of failing to give out millions of dollars it received from the federal government to pay employees out of work during the pandemic.

Earlier this month, the president of UNITE HERE, the union representing workers, sent a letter to the Small Business Association requesting “strict scrutiny” be given to how Omni used the loans it received, including for its Providence location.

According to SBA records, Omni Providence requested a Paycheck Protection Program loan of $2.6 Million and promised to retain nearly 250 jobs.

“As far as I know, not a single worker has a seen a dime of that money,” UNITE HERE president Carlos Aramayo told NBC 10 News.

In the letter sent by Aramayo, he noted the Providence hotel “remains temporarily closed” and said “none of our members have been rehired or paid by the hotel.”

Talk of “Building Back Better” and making huge investments into American infrastructure is exciting for building trades members nationwide, as they will be entrusted with completing these massive projects.

Sabitoni said that Rhode Island was one of the last states to come out of the previous recession, making the current economic struggles an even greater worry.

Despite their previous track record, Sabitoni believes the state has learned from past experiences and is better equipped to recover. There is promise that the recovery will be easier, as the construction industry has moved forward in the state by following all COVID-19 safety protocols. Read more here.

Labor unions may be losing power nationally, but they remain a strong presence locally, as a brewing dispute over beer delivery in the Ocean State illustrates.

Teamsters Local 251 is challenging the sale of Cranston-based McLaughlin & Moran Inc. to Mancini Beverage, claiming it would create a near monopoly on beer distribution in the state. The union, which represents most employees at Mancini, has presented a petition with the names of dozens of business owners and managers to the state attorney general’s office, asking for an investigation of antitrust violations.

West Greenwich-based Mancini naturally refutes the notion it would have anything approaching a monopoly, citing a growing local craft beer market.

Rhode Island in 2019 had the highest union representation rate in New England and the fourth highest in the country, according to the U.S. Bureau of Labor Statistics.

If nothing else, the public attention raised by the Teamsters’ opposition to the pending sale will ensure it isn’t rubber stamped by regulators. And that’s in the best interests of not only the union but all Rhode Islanders.

@CLUWRI extends its sincere condolences to the family of Dorothy Donnelly. Dorothy was an integral part of CLUW’s continued success over the years. Her legacy will remain the epitome of what we strive to accomplish. Thank you for your service, Dorothy! 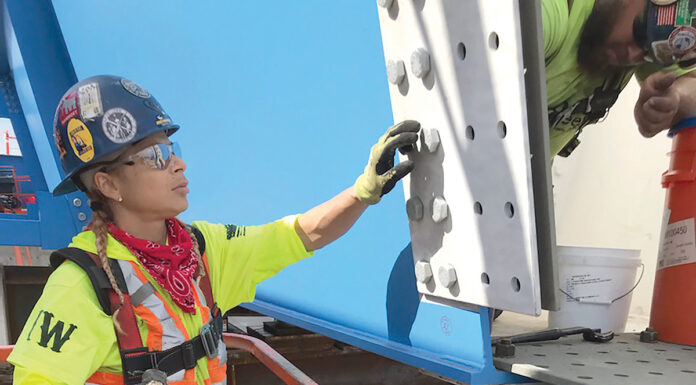 Darche Hood went to college to earn a degree in finance.

But now the numbers she’s calculating are from a measuring tape stretched between wall studs. Hood is an insulation installer working on an expansion project at Toray Plastics (America) Inc. in North Kingstown.

The 46-year-old Providence resident is typically one of the only female carpenters on the job, part of a small population of Rhode Island women who are finding benefits of going into construction, such as plentiful job opportunities and equal pay. They’re ironworkers, laborers, electricians – and in some cases, new business owners.

But while women accounted for about 10% of the national construction workforce in 2019, Rhode Island saw a dip in the number of women in the field – from 3.4% in 2017 to just 2.2% in 2018, according to figures provided by the R.I. Department of Labor and Training.

“For a long time, people looked down at us, putting on work boots instead of loafers and a tie,” said Michael Sabitoni, president of Rhode Island Building & Construction Trades Council and business manager for the Rhode Island Laborers’ Local 271. “But it’s one of the few industries where you get the same pay if you do the work. There’s absolutely more opportunity for women.” Read more here.

By any measure, 2020 has been one of the most historic years in recent memory. Working people across the country stepped up in response to the COVID-19 pandemic, continued to organize their workplaces and came together to help elect a labor-friendly president and vice president in Joe Biden and Kamala Harris. We covered these stories and many others throughout the year and here are the top 10 most-read stories by you, our readers.1. In Memoriam: Union Members Lost in COVID-19 Pandemic: “As the COVID-19 pandemic spreads across the United States, our sisters, brothers and friends in the labor movement are among the first casualties. It is important for us to work together during this crisis to prevent further deaths. It is important to thank those who are doing the work to keep us safe and fed. It is important to remember those who we lost because of the coronavirus.”

2. Working People Respond to the Killing of George Floyd with Nationwide Protests: “Racism plays an insidious role in the daily lives of all working people of color. This is a labor issue because it is a workplace issue. It is a community issue, and unions are the community. We must and will continue to fight for reforms in policing and to address issues of racial and economic inequality.”Read more here.

Mandatory overtime, speed-up, and union-busting at the U.S. Postal Service—sound familiar? Here’s how postal workers in 1978 confronted grueling and dangerous conditions: they walked out on a wildcat strike.

Signed, Sealed and Delivered: Labor Struggle in the Post Office (1980, 36 minutes, by Tami Gold, Dan Gordon, Erik Lewis) shows the strike and the events that followed. Management at the New Jersey Bulk Mail Center fired 200 strikers; workers launched a campaign to get them rehired. After a young worker was tragically killed on the job, their fight against dangerous conditions drew national attention.

Today postal workers are once again facing forced overtime, speed-up, and union-busting… plus the daily risk of deadly pandemic exposure. What can we learn from this history to power up our strategy for the fights ahead?

About 100 people on Zoom and on the Facebook livestream heard from the filmmakers and from veterans of the strike, in a webinar hosted by the organizers of the ad hoc “Save Our Postal Service” Facebook page. Read more here.

Nationally, construction workers account for 20-25% of overdose fatalities and in Rhode Island, 1 in 5 individuals who have died of an overdose worked in the construction industry. Over the past few years, the Rhode Island Building and Construction Trades Council, along with several partners, have been working to address this issue and educate leaders on ways to combat the problem plaguing the industry.

LaborVision has made this issue a priority in the new year and beginning on Monday, January 4th we will be releasing a 3-segment series focusing on the RI Opioid Crisis. Throughout this series you will hear from Michael Sabitoni, President of the RI Building and Construction Trades, Jill Traecy, an Independent Licensed Clinical Social Worker and Health Initiatives Manager at Building Futures, and Tim Potter an Electrician with IBEW Local 99 and a Certified Peer Recovery Specialist.

We will discuss the industry impact and why this issue is impacting the construction industry at such an alarming rate. We will also take a closer look at the RI Opioid Crisis: Our Response Our Recovery training developed by Building Futures, in partnership with the RI Building and Construction Trades and the Associated General Contractors of America, RI Chapter, with support from the RI Dept. of Labor and Training. In the final segment of the series the group will discuss Peer Support Models and the importance of Peer Recovery Programs throughout the industry.

Do not miss this series airing on January 4th, 6th, and 8th. Keep up with all LaborVision’s latest segments on our website: www.laborvisionri.org

LaborVision has a new email address. If you or your organization has an event or issue, you’d like LaborVision to cover please email: laborvisionri@riilsr.org

The LaborVision team wishes everyone a Happy and Healthy New Year!