About 50 workers picketed and chanted outside the Dodge Street facility to bring attention to what they said were dangerous under-staffing conditions and low pay offerings that are preventing additional hirings.

Patrick Quinn, vice president of the Rhode Island chapter of Service Employees International Union, said Bannister’s $12 an hour starting wage was the lowest in the city.

In negotiations with company representatives, the union, which has 100 workers at Bannister, initially asked for a $2 increase over three years, union officials said. The two sides eventually agreed to consider a one-year deal in light of the pressures of the coronavirus. But they could not come to terms on wages.

The union asked for a 75-cent hourly increase; the company came no higher than a 40-cent-an-hour increase, union officials said.

And there is the issue of staffing. Read more here. 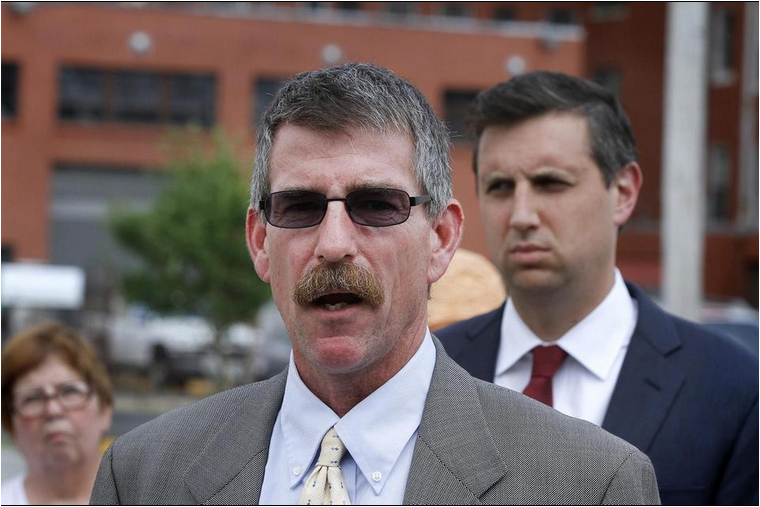 PROVIDENCE – The union that represents some 1,000 nurses, certified nursing assistants and other health professionals at Our Lady of Fatima Hospital is raising new concerns about an application before the Health Services Council that would give private investors David Topper and Samuel Lee ownership of Fatima and Roger Williams Medical Center.

Both are operated by CharterCARE Health Partners, a for-profit joint venture with Los Angeles-based Prospect Medical Holdings, which owns 85% of the two hospitals.

“We discovered that they had not made a full disclosure of a whole broad range of lawsuits and things that they’ve been involved in that the application requires they disclose to the regulator. So we have filed a formal, written objection,” Chris Callaci, general counsel for Local 5110 of the United Nurses and Allied Professionals union, or UNAP, told The Journal.

The concerns follow a recent ProPublica investigation that disclosed heavy debts held by Prospect and what employees of company hospitals, including Fatima, said were substandard conditions precipitated by that debt. And they precede a hearing before the Health Services Council, a regulatory division of the state Health Department, scheduled for Tuesday.Read more here.

(EAST PROVIDENCE, RI) – Stericycle drivers in Woonsocket, R.I. voted overwhelmingly, by a 2-1 margin, to join Teamsters Local 251 in Providence yesterday. The 35-worker unit is seeking a strong voice to address their workplace concerns.

“I think by unionizing we made a great company greater; and with the camaraderie of the drivers, we can win the respect, wages, safety and health care all waste workers deserve—the sky’s the limit,” said Joe Rubiano, a route driver at Stericycle for two-and-a-half years.

According to Jim Richard, a Stericycle route driver and former member of Teamsters Local 170 in Worcester, Mass., his co-workers had long known the need for union representation, but the push to organize became all the more crucial in the weeks and months after the pandemic started.

As faculty members at Rhode Island College, we are writing to express our support for 35 colleagues of the AFSCME Council 94 who were recently fired. The layoffs are the result of a large budget deficit caused by cuts to RIC’s funding by the governor and General Assembly, as well as decreased enrollment due to COVID-19 and the Rhode Island Promise program for the Community College of Rhode Island.

Even before these recent cuts, Rhode Island was ranked 45th among U.S. states in per-capita public higher education funding. A decrease in funding and continuing uncertainty has enabled the RIC administration to make radical and unnecessary structural changes to the college, most recently in the form of layoffs that threaten the academic excellence and future of RIC.

Most of the layoffs involved administrative and janitorial staff, who are dedicated and valued members of the RIC community. These employees performed critical services during the pandemic when they risked their own health to ensure that the campus was sanitized, kept departments functioning virtually and made financial sacrifices in their salaries to help the institution in a time of crisis. Read more here.

AFL-CIO: Amid the COVID-19 Pandemic, the AFL-CIO Releases Its Annual Death on the Job: The Toll of Neglect Report

View Death on the Job: The Toll of Neglect report here: aflcio.org/dotj-2020

As the COVID-19 pandemic continues to spread, affecting more than 7.4. million Americans, with more than 210,000 deaths in the United States, the AFL-CIO today released its annual Death on the Job: The Toll of Neglect report, which contains data showing how the current administration’s failure to act in the past has been a main contributor to the gravity of the current public health crisis.

During a video press conference to release the report, AFL-CIO President Richard Trumka outlined the current health crisis as a product of the Trump administration’s regulatory rollbacks, weakened regulations and resource cuts to the Occupational Safety and Health Administration (OSHA).   Read more here.

***Remember to buy your food and beverages at Stop & Shop, Shaws, and Eastside Marketplace where our union brothers and sisters work.

In 2020 we celebrate two monumental events in American history: the 100th anniversary of the ratification of the 19th Amendment, granting American women the right to vote, and the 150th anniversary of the 15th Amendment that at least nominally enfranchised African American men. To mark the occasion, URI is planning a yearlong virtual series. Join us as we explore suffrage history and modern-day voting issues.

▪ Now showing on Labor Vision, the frontline workers of SEIU Local 1199NE at Bannister House in Providence went on strike from Oct. 2-4 for safe staffing legislation. Watch and listen how labor leaders and politicians alike question how residents are shortchanged by receiving only two hours a day of care when industry standards say they should receive 4.1 hours a day.