Last week hundreds of nursing home workers voted on a strike deadline if they are unable to reach a settlement on their contract proposals to achieve safer staffing for residents, fair wages, affordable healthcare and access to training opportunities.

Stand in Solidarity with Nursing Home Workers as they hold informational pickets this Thursday, July 16 from 2:30 to 3:30 pm at Bannister Center (135 Dodge St. in Providence, RI).

There will also be informational pickets from 2-4pm at:

PROVIDENCE — Workers at three Rhode Island nursing homes have voted to go on strike at the end of the month unless their employers agree to hire more staff and provide higher wages and better health-care benefits.

Adanjesus Marin, lead organizer of District 1199 of the Service Employees International Union, said the vote taken on Monday was nearly unanimous, with hundreds of members in support of striking and fewer than 10 opposed.

The facilities’ managers were notified that if agreements aren’t reached, the workers intend to strike at 6 a.m. on July 29.

“We can’t call people heroes while we keep them in poverty,” Marin said in an online news briefing. “We don’t do this lightly, but we do this united.” 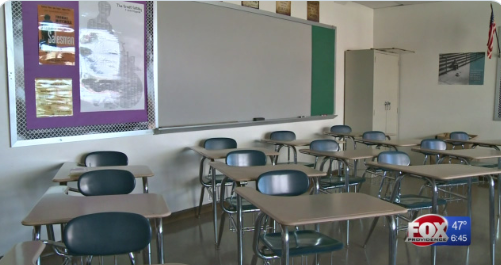 PROVIDENCE, R.I. (WPRI) ─ While school districts across the country are making decisions on how to safely resume classes come fall, the countdown is on in Rhode Island with students expected to head back to school next month.

But the head of the Providence Teachers Union, Maribeth Calabro, tells Eyewitness News that even just one child contracting COVID-19 after returning to school is too many and the burden being placed on educators is “extremely heavy.”

Calabro said she, as well as dozens of teachers across the state, are concerned about reopening schools on Aug. 31.

The state released guidance on how districts can reopen schools come fall, but she believes it goes beyond a new set of rules and restrictions.

“My school has almost 1,000 kids, that’s a lot of bodies,” she said. “Then masking is another concern, making sure kids keep the masks on, and then what about ventilation? Opening the doors and windows?”

Today, the AFL-CIO announced a six-figure television and social media ad buy that will blanket the state of Kentucky over the next two weeks. The ad calls on Sen. Majority Leader Mitch McConnell to do his job by passing the HEROES Act to provide long-overdue relief to working people who are suffering from the fallout of COVID-19.

The HEROES Act is grounded in America’s Five Economic Essentials, the desperately needed measures to keep working people safe and economically secure. It would save workers’ lives through a federal workplace infectious disease standard. It would include large scale aid to state and local governments and the Postal Service, to preserve public schools and public services and support the teachers, first responders and front-line workers who serve our communities. It would extend the additional $600 a week in unemployment benefits that tens of millions of laid-off workers are relying on and help these workers retain their health care. And it would protect earned pensions and take important steps to keep workers on the payroll. -READ MORE

A nine-year strike, the longest in the history of the United Auto Workers, began at the Division of Park-Ohio Industries Inc. in Cuyahoga Heights, Ohio. During the strike the company lost nearly $50 million, $34.5 in 1992 alone.  Despite scabs, arrests and firings, UAW Local 91 members hung tough and in 1992 won and signed a new three year agreement. – 1983

Italian immigrants and anarchists Nicola Sacco and Bartolomeo Vanzetti are convicted in Massachusetts of murder and payroll robbery – unfairly, most historians agree – after a two-month trial, and are eventually executed. Fifty years after their deaths the state’s governor issued a proclamation saying they had been treated unfairly and that “any disgrace should be forever removed from their names.” – 1921

In an always timely segment that was taped late last year, clinical social worker, Jill Sypole from Building Futures, sits down with Erica Hammond to talk about the construction industry from the apprenticeship stage through retirement and how injuries are part of the career track and how pain management can lead to opioid dependence, and eventual treatment.