Whether they call it appreciation pay or hazard pay, the pandemic bonuses for union hourly workers at Stop & Shop supermarkets have ended.

Many employees say they’re still at risk, and they’re circulating a petition to keep the payments coming.

Grocery store workers have been on the frontlines of the pandemic since the very beginning.

Stop & Shop started giving its employees so-called appreciation pay in March — and extended the bonus in April. But the 10% pay bump ended on Saturday, even as the pandemic continues.

Stop and Shop released a statement, saying it wanted to thank its employees for working during extraordinary circumstances.

UFCW: Pledge to #ShopSmart during COVID-19

Help protect yourself and the workers at your local grocery store

R.I. Alliance for Retired Americans: Elimination of the Unfair GPO and WEP Provisions of the Social Security Act

The Government Pension Offset (GPO) and Windfall Elimination Provision (WEP) penalize people who have dedicated their lives to public service, including many teachers, firefighters, and police officers, by taking away benefits they, or their spouses, have EARNED.

Why is this important?

To urge all Alliance for Retired Americans members, friends or everyone subject to the GPO/WEP to increase their efforts to make sure the Congress of the United States enacts legislation to repeal the Government Pension Offset and the Windfall Elimination Provision from the Social Security Act. 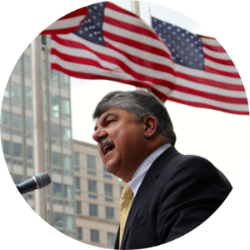 With the help of our affiliates, state federations and central labor councils, we undertook a very successful set of nationwide actions for the Workers First Caravan for Racial and Economic Justice last month. The labor movement demanded that the Senate take up and pass the HEROES Act, and we demanded the passage of policing reform legislation. Last week, we saw the postal unions mobilize to demand Congress and President Trump provide assistance to the U.S. Postal Service, which has been financially damaged by the COVID-19 pandemic like so many other essential institutions in our society.

Yesterday, a coalition of unions and community allies delivered failing report cards to the senators who have failed to support the HEROES Act or take any action at all in support of much-needed aid to state and local governments. In the coming days, we will see our affiliates stepping up and organizing events designed to hold all senators accountable for passing strong, comprehensive legislation in the Senate. The labor movement will continue to take strong action and build comprehensive mobilization plans, executable even during this pandemic, that will bring us to victory with the passage of the HEROES Act. We are going to need everyone’s help here, and I know after what I saw with the Workers First Caravan for Racial and Economic Justice that we will be able to count on each other to win this battle.

Opinion by Randi Weingarten, President of American Federation of Teachers

Daniel DiSalvo asks: “Will Unions Let Schools Reopen?” (op-ed, June 30). Of course! The AFT published our school reopening plan in April. We said it isn’t a question of whether to reopen, but how to do it safely. We need the infrastructure and investment to physically distance, stagger classes, provide personal protective equipment and test, trace and isolate new cases. The real question is whether the Trump administration will pay for this, but, knowing money is an issue, Mr. DiSalvo raises the red herring of teacher pensions to try to pit teachers against parents.

The only time pensions have been mentioned during reopening is in the context of senior teachers being offered retirement incentives, because they may be at risk if they return prematurely. We agreed it was a good idea to explore. But to suggest a Covid-19-induced state funding shortfall should be solved on the backs of teachers by denying them retirement security—their own deferred wages—makes an already bad economic situation even worse.

Public pensions play a vital role in stabilizing the economy. They provide access to capital during times of uncertainty, support millions of American jobs, and in 2018 alone contributed $1.7 trillion to output and added $341 billion to state and local tax revenue. Every dollar of state and local pensions generates $8.48 in economic output nationally.

Teachers have played a Herculean role throughout this pandemic; ask any parent whose kids were engaged on a laptop screen for three months. We should stop trying to hurt them and focus on the need to return safely to classrooms. For the economy to reopen, schools must too, but that’s going to require more investment, not less.

TruthOut: Facebook and Its Big Tech Cronies Are Upgrading Their Anti-Union Tools

Recently, Facebook unveiled its new Facebook Workplace, a Slack Connect-like intranet-style chat and office collaboration tool that allows administrators to censor certain words, company spokespeople explained, such as “unionize.” The Workplace program with built-in labor suppression is simply the most recent example that suggests, contrary to stereotypes of open and egalitarian corporate cultures, big tech is not that different from Walmart when it comes to its attitudes towards unions.

The negative reaction to Facebook’s Workplace program announcement was swift and unsurprising, given the phenomenal reach and power of Facebook. The AFL-CIO, the country’s largest union federation, attacked Facebook for presenting itself “as a champion of free speech, yet here it is marketing itself as a way for corporations to suppress the speech of their employees.” It demanded that Facebook CEO Mark Zuckerberg “personally apologize to working people, pull this tool immediately and conduct a board-level investigation into how this product came into existence in the first place.” Zuckerberg has not yet responded, but Ohio Sen. Sherrod Brown has also written to him, stating he was “deeply troubled” by the platform’s potential use as an anti-union tool.

YouTube: The Wobblies (Industrial Workers of the World, IWW) documentary

The March of the Mill Children, the three-week trek from Philadelphia to President Roosevelt’s home on Long Island by striking child and adult textile workers, was launched by Mary Harris “Mother” Jones. The march turned public attention on the scourge of child labor and energized efforts to end it by law. – 1903

The National Labor Relations Act, also known as the Wagner Act, was signed by President Roosevelt. This statute guarantees the basic right of private sector employees to organize into trade unions, engage in collective bargaining for better terms and conditions at work, and to take collective action including striking when necessary. The act also created the National Labor Relations Board, which conducts elections that can require employers to engage in collective bargaining with labor unions. The Act does not apply to workers who are covered by the Railway Labor Act, agricultural employees, domestic employees, supervisors, federal, state, or local government workers, independent contractors and some close relatives to individual employers. – 1935-LEARN MORE