PROVIDENCE — Longtime teachers-union lobbyist Patrick Crowley was unanimously elected as the next secretary-treasurer of the Rhode Island AFL-CIO, representing nearly 80,000 workers in diverse industries across the state.

In that capacity, he will serve as the number two person behind R.I. AFL-CIO President George Nee.

He succeeded Maureen Martin, who is retiring after 10 years as secretary-treasurer. The election, in which Crowley was not contested, took place Feb. 24.

Crowley said he will fill out the remaining two years of Martin’s four-year term. Previously, he served on the executive board.

Crowley said his duties in the part-time role will be to help ensure the organization maintain a strong financial position, and working with affiliates to organize new members.

“There’s no reason we can’t get that to 25 percent in the near future. And that’s what I will work to do.

Crowley has dedicated 25 years in the labor movement, the last 15 at the National Education Association Rhode Island, where he now serves as its chief lobbyist as the assistant executive director in government relations.

George Nee, President of RI AFL-CIO reading to children at the NEARI Read Across America event held on Saturday at Warwick Mall.

PROVIDENCE A proposed $1 increase in Rhode Island’s $10.50-an-hour minimum wage has cleared all legislative hurdles on its way to Gov. Gina Raimondo’s desk.

The Senate approved the increase, effective Oct. 1, by a vote of 30 to 6, largely along party lines, on Wednesday with Democrat Leonidas Rapakis, the onetime owner of Venus Pizza, joining the five Republicans voting nay.

The legislation also cleared the House by a strictly party-line vote of 61 to 7.

“For a low-income person, for a lot of people, $90 a week is a lot of money, and we are getting further and further behind our neighbors, particularly Massachusetts, and even Connecticut,″ George Nee, president of the Rhode Island AFL-CIO, told the lawmakers at an earlier hearing.

The Valley Breeze: Custodians win battle for their jobs

Most of the 20-member custodial staff attended the meeting and were ecstatic to hear that the three-month battle was over and they had won.

“All those guys can go home and sleep tonight now they know their jobs are secure,” Homerston said.

He added that Scituate custodians will not need to take a pay cut. Homerston said the bids for privatized service proposed a pay reduction of $7 or $8, or 35 percent, for custodial staff, and they would not be able to continue employment with the district or a private company with that sort of “huge cut.”

AFL-CIO: Information and Resources on the Coronavirus (COVID-19) Outbreak

The United States and the world are facing the very real threat of the widespread transmission of coronavirus (COVID-19). Federal health officials have said the spread of the virus is likely and may cause severe disruptions to everyday life.

Health care workers, firefighters, police, airline workers, emergency service workers and other first responders will be on the front lines of responding to an outbreak. But as we have seen with the initial response to the virus on our nation’s shores, our health care workers and first responders do not have the necessary resources and equipment or adequate training and communication available to protect them from contracting, and spreading, this virus.

The COVID-19 coronavirus isn’t the first time our nation has faced the threat of a pandemic outbreak. In the past two decades alone, we have seen deadly viruses such as SARS, Ebola, swine flu (H1N1) and avian flu (H5N1) pose the real threat of causing a national health emergency. And each emerging public health threat revealed a woefully unprepared health care system unable to adequately address these threats by reducing the risk of exposure to the general public and giving proper protection, resources and training to workers on the front lines. -READ MORE

After years of prototyping, and more years still experimenting with surveillance-based convenience stores, Amazon has officially opened its first cashierless grocery location in its home city of Seattle. One of America’s largest food worker unions is already pissed about it.

“Amazon represents a clear and present danger to millions of good jobs,” United Food and Commercial Workers International Union (UFCW) President Marc Perrone wrote in a statement Tuesday. “The brutal truth is that Amazon is focused on one thing—eliminating as many jobs as possible to enrich one multi-billionaire, Jeff Bezos.”

The 10,400 square-foot Amazon Go Grocery location at 610 East Pike Street replaces cashiers with a network of cameras that track what customers grab, charging them via smartphone when they exit the store. Go Grocery will, of course, still need employees—to stock shelves, answer customer questions, and scan IDs for shoppers trying to purchase alcohol—“a couple dozen people,” according to an estimate reported by CNBC. In all likeliness, this is a significant reduction from the number of staff a similarly-sized Whole Foods (the grocery chain Amazon purchased in 2017) employs, though the company declined to provide numbers or more general comment when Gizmodo reached out on Tuesday. -READ MORE 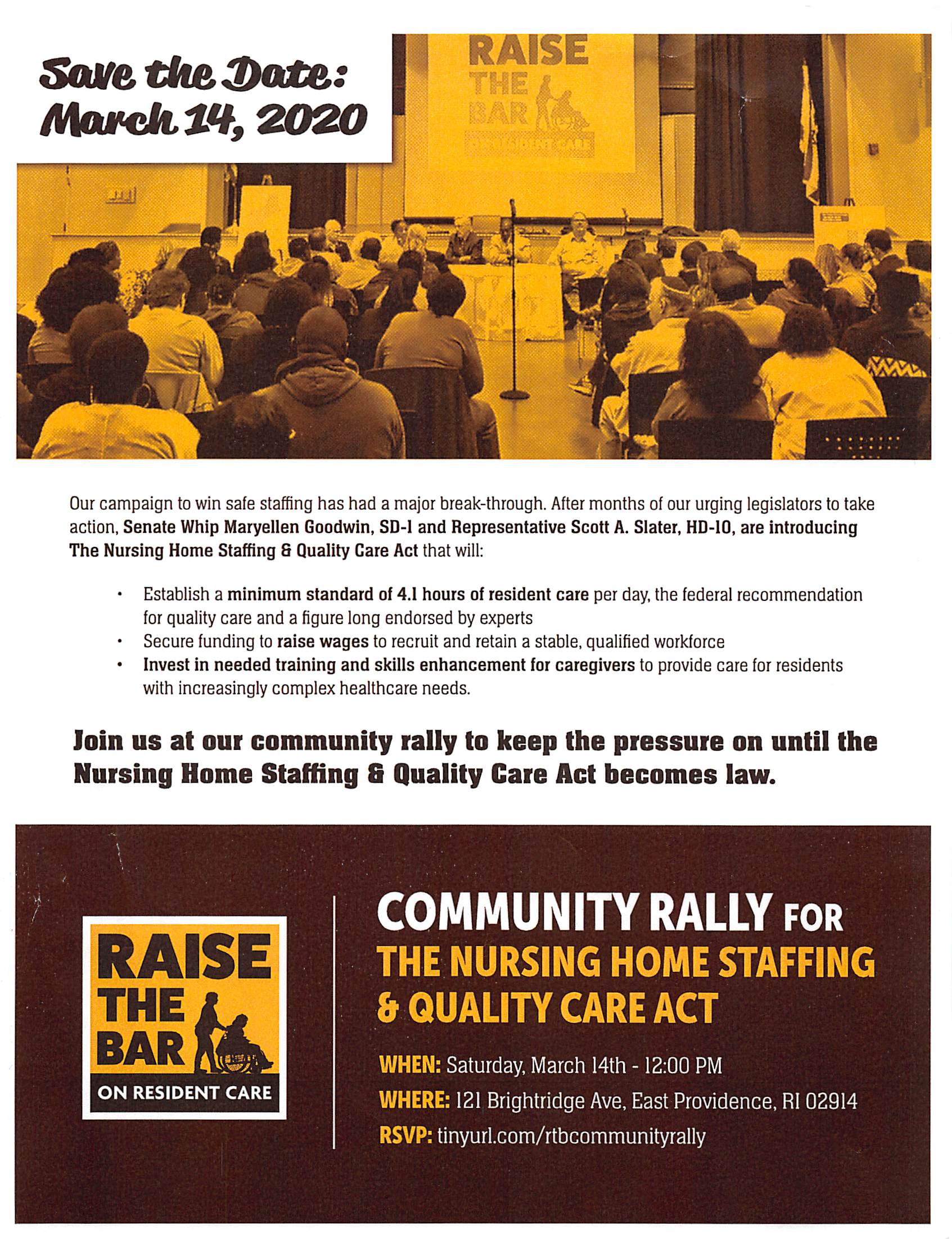 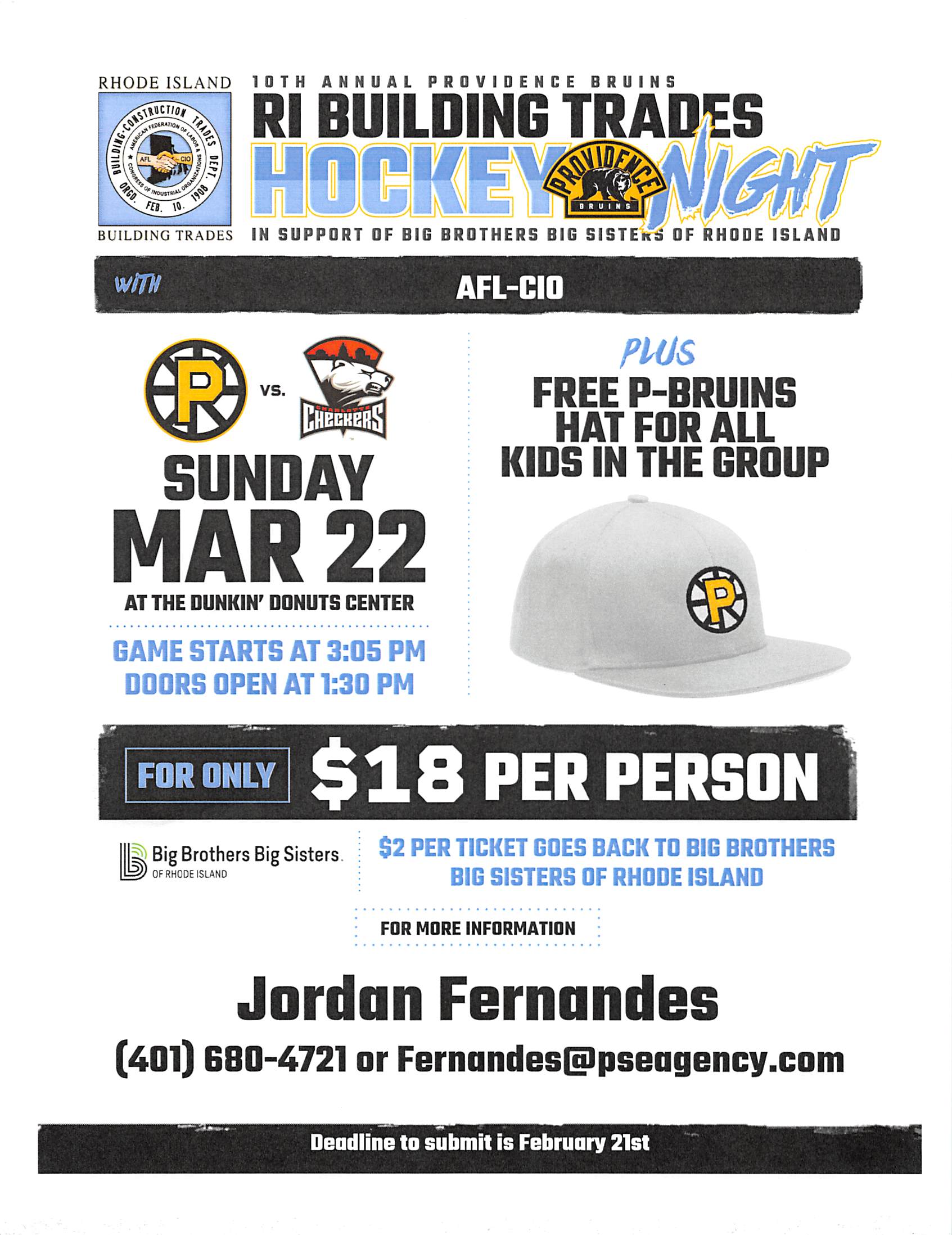 William Green was born on this date in Coshocton, Ohio. He was a coal miner who succeeded Samuel Gompers as president of the American Federation of Labor, serving in the role from 1924 to 1952. He held the post until his death, to be succeeded by George Meany. – 1873

In Case You Missed It…

In the first half of the show, Rep, David Bennett (D) Warwick, and SEIU Healthcare 1199NE Elected Organizer, Emmanuel Falck sit down to talk about a series of issues with Erica Hammond, including the recent vote to increase the minimum wage in Rhode Island; the fact RI is the only state in New England without a minimum safe staffing requirement law, what healthcare workers are planning to do to change that; and a shortened exchange on the need to increase pay for Direct Service Professionals that care for individuals with disabilities.

And in the second half of the show, a follow-up to a recent segment, we bring back Josh Homerston, President, and Nick Carnevale, V.P. of the Scituate school custodians to describe the outpouring of community support demonstrated after educating the public through a grassroots campaign as to the waste of privatization of services.