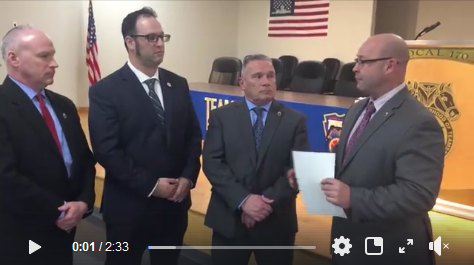 NEW MEMBERS OF THE JOINT COUNCIL 10 EXECUTIVE TEAM SWORN IN
Joint Council 10 Secretary-Treasurer Sean O’Brien swore in the newest additions to the Joint Council 10 Executive Board tonight at the Local 170 Union Hall in Worcester, Massachusetts.

“We are constantly looking to broaden the Joint Council’s leadership,” said O’Brien. “Shannon, Matt and Brett bring a variety of experiences and viewpoints that will only serve to strengthen New England and pay dividends to our membership. 📺WATCH VIDEO

USA Today: From California to New York, states are raising minimum wages in 2019 for 17 million workers 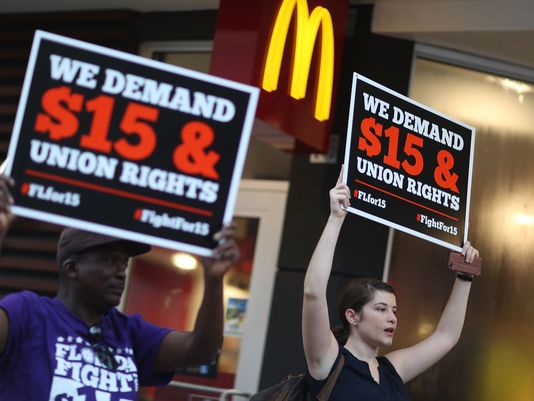 Starting on New Year’s Eve day, Rosa Rivera will make $15 an hour at her McDonald’s job in Manhattan, doubling what she earned just five years ago at the same location.

The milestone comes after she and fellow workers advocated tirelessly – sometimes going on strike – for a higher minimum wage since 2012 in the city and state.

For Rivera, a 53-year-old Bronx resident who lives with her adult son, that means she no longer needs to prioritize which bills to pay and which to skip to get by.

“Before it was difficult. $7.50 wasn’t enough,” Rivera said through a Spanish interpreter. “The difference with $15 is I will be able to pay my rent and bills on time. I can pay for transportation easily, and I may have a little bit more to save.”

Besides New York, workers in up to 21 other states and the District of Columbia will receive higher minimum wages next year, according to a National Employment Law Project report given exclusively to USA TODAY. About 17 million workers will benefit from the 2019 wage increases, the nonprofit estimates. -READ MORE

BOSTON (AP) — National Grid and union representatives reached a tentative agreement to end a bitter contract dispute that has left about 1,200 natural gas employees locked out for months in Massachusetts, according to both sides.

The utility and two United Steelworkers locals announced the deal in a brief, joint statement late Wednesday night following intense negotiations and increasing concern among state officials who had pressured National Grid to end the lockout.

“The two unions will present the terms of the agreement to their members for ratification on or before Jan. 7, 2019. Details of the agreement will not be shared before both unions have had an opportunity to vote,” the statement read.

In a hint of potential progress toward a settlement, the company and the unions indicated in a previous joint statement that it had agreed to a “firm schedule” for bargaining with the intention of reaching an agreement by last Friday, though that deadline was missed by several days.

The workers, including those who maintain natural gas infrastructure in National Grid’s eastern Massachusetts service area, were locked out by the utility in July after a previous collective bargaining agreement expired. National Grid also serves customers in Rhode Island and New York, but workers in those states were not affected. -READ MORE 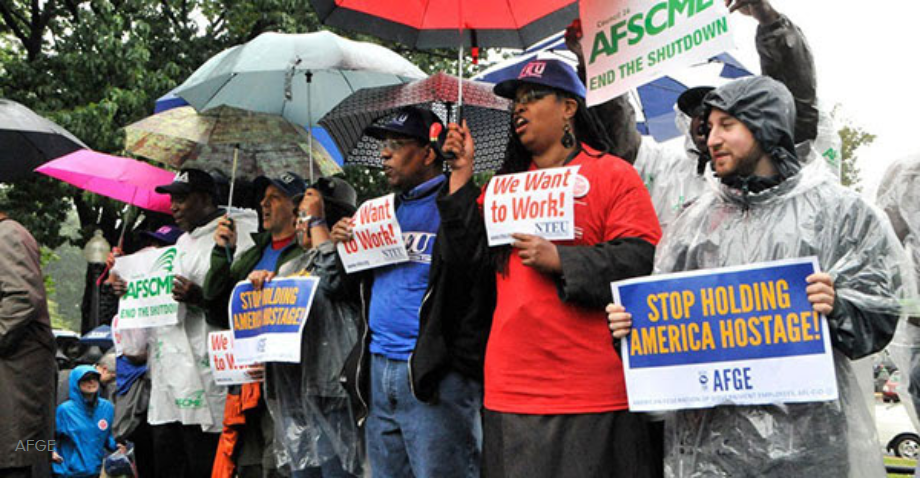 The government shutdown is now in its 12th day, meaning some 800,000 federal employees are still without a paycheck because President Donald Trump refuses to sign a federal budget that doesn’t include $5 billion for a border wall. Working people—and their livelihoods—should never be used as political pawns. As congressional leaders prepare to meet with Trump later today, take action now to stop the shutdown.

Despite the shutdown, roughly 420,000 federal employees, from law enforcement and corrections officers to Transportation Security Administration agents, are still working and putting their lives on the line without collecting a paycheck. That doesn’t include about 380,000 workers who are currently furloughed, or sent home without pay.

That’s why AFGE filed a lawsuit against the Trump administration for illegally forcing federal employees to work without pay.

“Our members put their lives on the line to keep our country safe,” said AFGE National President J. David Cox Sr. “Requiring them to work without pay is nothing short of inhumane.” –READ MORE

Salon Media Group: The 8 most important labor stories of 2018

In June, the Supreme Court issued its long-awaited ruling in Janus v. AFSCME—and it was just as bad as everyone feared. In a 5-to-4 decision, the court found that public-sector unions violated the First Amendment by collecting so-called fair-share fees from workers who aren’t union members but benefit from collective bargaining regardless.

A report by the Illinois Economic Policy Institute estimated that the resulting “free-rider” problem could eventually lead to the loss of 726,000 public-sector union members nationwide. This diminished strength could result, in turn, in a 3.6 percent decline in public-sector wages.

But the immediate fallout has been less catastrophic than some forecast. Public-sector unions took a hit to their finances, as automatic deductions from non-members ceased. But many are reporting that membership is holding steady, or even increasing. That’s thanks in large part to protective measures enacted in blue states, as well as proactive membership organizing by unions themselves—both of which the Right is attempting to overturn or counter with its own aggressive “opt out” campaigns. While it’s far too early to tell what the long-term impact of Janus will be, the ruling wasn’t the knockout blow that anti-union forces had hoped for.

5 out of 6: The number of federal employees who live outside Washington, D.C. 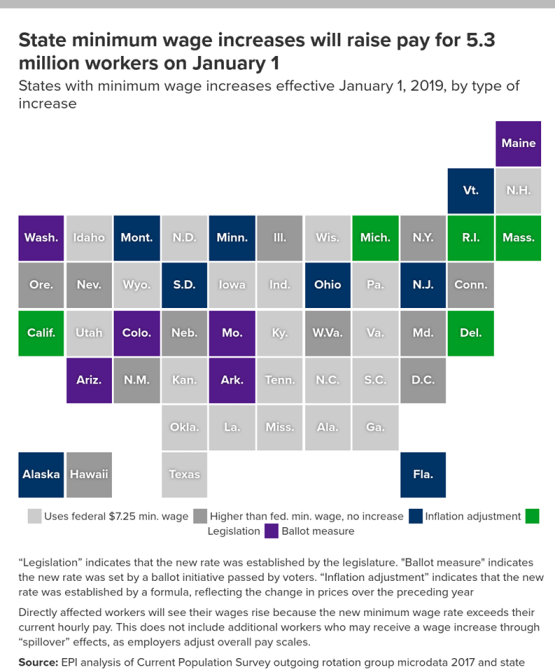 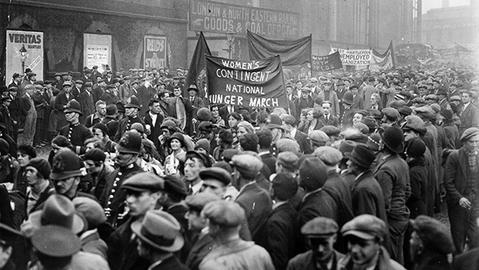 John L. Lewis is elected president of the United Mine Workers. Fifteen years later he is to be a leader in the formation of what was to become the Congress of Industrial Organizations (CIO) – 1920

With the Great Depression in full force, the year 1932 opens with 14 million unemployed, national income down by 50 percent, breadlines that include former shopkeepers, businessmen and middle-class housewives. Charity is overwhelmed: only one-quarter of America’s unemployed are receiving any help at all – 1932

Workers begin to acquire credits toward Social Security pension benefits. Employers and employees became subject to a tax of one percent of wages on up to $3,000 a year – 1937

Adolph Strasser, head of the Cigar Maker’s Union and one of the founders of the AFL in 1886, died on this day in Forest Park, Ill. – 1939

The holidays may be over but no one ever gets tired of seeing little ones’ faces lighting up to find a bagful of gifts left by Santa; and while it may not have been Santa or on Christmas morning, the Gingerbread Express at the William D’Abate School in Providence may just be one of the happiest places on the planet on Dec. 19. The collaboration is between many unions, with the bulk of the work coming from NEARI, IBEW Local 2323 and Teamsters Local 251, with assists from several more unions and community partners. Many local leaders stop by for the event, deliver gifts to the very-deserving kids, wish members well for our camera, and then step back and enjoy the smiles they’ve helped provide. Hopefully this provided a positive start to everyone’s new year.

On a sad postscript to the festivities, after the Christmas holiday, Teamster Business Agent Dennis Lavallee was taken from us suddenly and far too soon, and we’ve ended the video with a tribute to him, since this was one of his favorite events of the year. Dennis was always there for his members, showed up on picket lines for anyone who asked, and was a true unionist in every sense of the word. He even ran for state senate in district 17 the last two cycles and only lost this last November by 200 votes. He will be missed by all who knew him. Rest in Power, Brother Dennis.