Providence Journal: Hospital strike: Why did months of talks lead to picketing?

PROVIDENCE, R.I. — How did events advance to where the more than 2,400 members of United Nurses & Allied Professionals Local 5098 went on strike Monday against Lifespan’s Rhode Island and Hasbro Children’s hospitals?

Some answers emerged in separate interviews that union and Lifespan leaders granted to The Providence Journal.

The answers differ. On this, the sides do agree: with UNAP’s existing contract set to expire on June 30, negotiations on a new one began on April 4. -READ MORE

Carmen Castillo, center, walks an informational picket line outside the Omni Providence Hotel on West Exchange Street in Providence on Friday afternoon. Castillo, a Providence city councilwomen who works in housekeeping at the OMNI, walked with other hotel workers represented by UNITE HERE, which is in contract negotiations with the hotel. 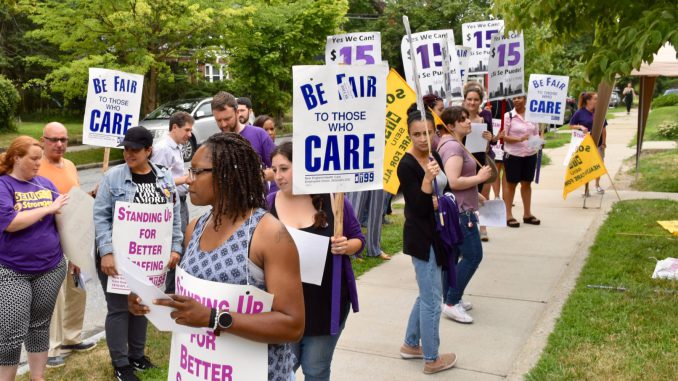 Educators at the Groden Center schools in Providence and Coventry picketed on the East Side of Providence to demand safer classrooms for their students and living wages for staff. The informational picket comes less than a week after WPRI/Channel 12 reported that the non-profit had bought an Audi A3 for their CEO.

“We feel we are left with no other choice but call public attention to what’s going on,” said Kaile Bautista, a Behavior Specialist at Groden North school in Providence. “Parents and taxpayers have the right to know what management wants to sweep under the rug: that many of our students are not receiving even the basics of their educational needs due to our safety and staffing crisis.” -READ MORE

Providence Journal: Iron men love their jobs, bolting together the future in Providence 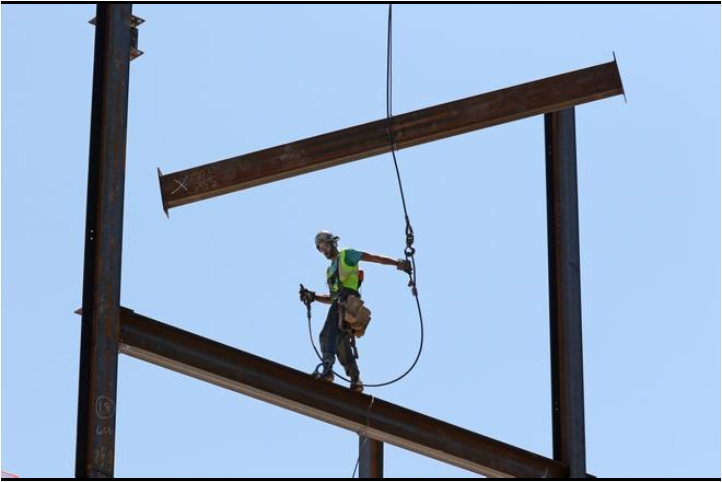 Ironworkers have a saying: show me where the first piece goes and the rest will tell a story.

Fifty feet in the air above Fountain Street, Kyle Coulombe, dusted in rust and as lean as a cable, shimmies up a naked steel column toward an 800-pound beam suspended above his head.

He’s already read what happens next in the story: the piece will help frame a front corner of the new Residence Inn Providence Hotel. But first, crane operator Steve Berube, whose skill is measured by each hoisted beam’s incremental movements, must inch this one close enough so Kyle can align a bolt hole at the end with one in the column and connect the two.

Then Kyle will step up on the beam and walk its length to secure the other end as the crane holds it steady. -READ MORE

From 1999-2016, more than 350,000 people died in the US from an overdose involving any opioid, including prescription and illicit opioids. Synthetic opioids deaths, primarily illicitly manufactured fentanyl increased 264% from 2012 to 2015. Synthetic opioids (including fentanyl, carfentanyl and other analogues) may pose hazards to a variety of responders, and other public safety workers who could come into contact with these opioids in the course of responding to this epidemic.

Responders are most likely to encounter illicit synthetic opioids in powder, tablet, and liquid form. Potential exposure routes include inhalation, mucous membrane contact, ingestion, and percutaneous exposure (needlestick). These exposures can potentially result in a variety of symptoms that can include the rapid onset of life-threatening respiratory depression. Skin contact is also a potential exposure route, but is not likely to lead to overdose unless large volumes of highly concentrated powder are encountered over an extended period of time. -READ MORE

In These Times: “Why We Threw Mark Janus a Going Away Party–But Didn’t Invite Him” 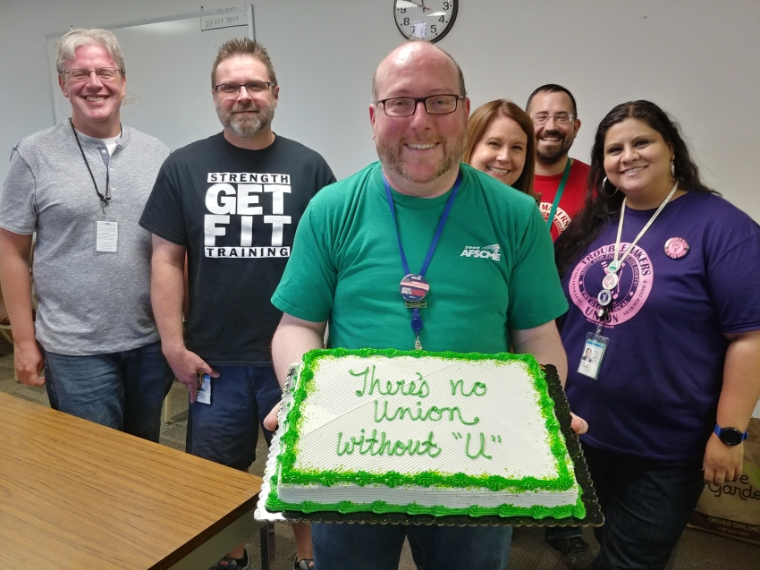 The AFSCME vs. Janus Supreme Court decision is not just the work of its plaintiff, Mark Janus: It’s the product of a well-financed and powerful anti-union machine, bankrolled and politically backed by the likes of the Koch family, billionaire Illinois Governor Bruce Rauner, the American Legislative Exchange Council and many, many others.

While he might just be a figurehead, for many members of AFSCME Local 2600, Mark Janus is also a former coworker. And those union members have no choice but to grapple with the intensely personal aspects of the case, in which Mark Janus—a Springfield, Illinois-based child support specialist—successfully charged that workers have a First Amendment right not to chip in for their unions’ bargaining services. Members had to watch a coworker who had spent years benefiting from his AFSCME contract strike a major financial blow against their union and all public-sector unions nationwide. -READ MORE

42%: The percentage in growth of active apprenticeships in the United States since 2013. 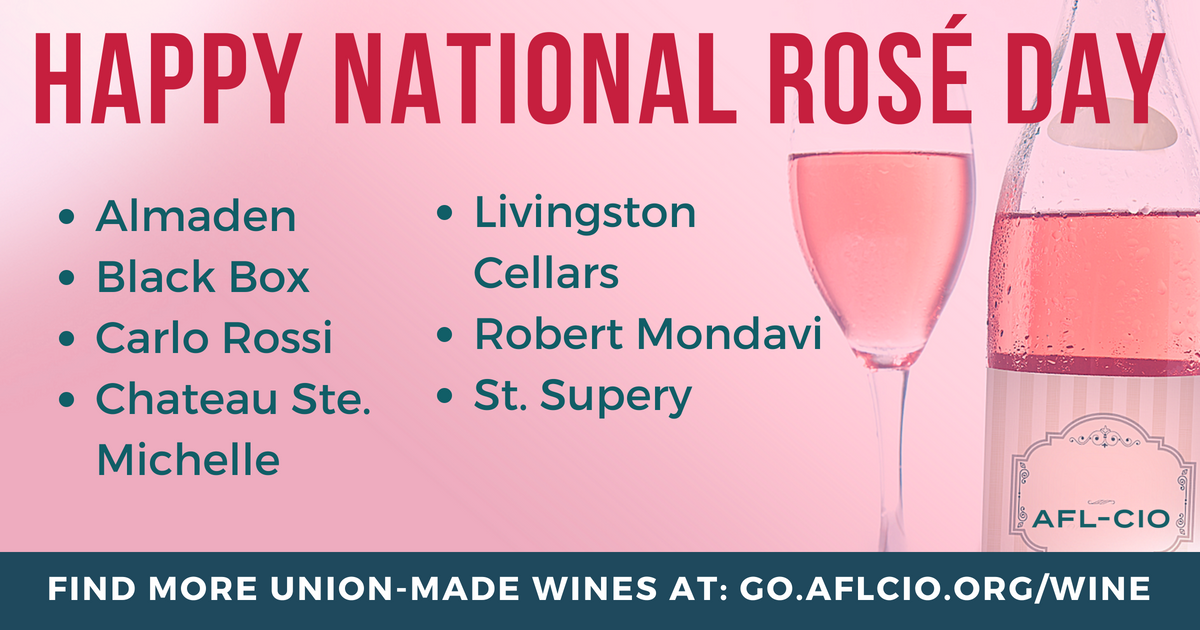 When: Continuing today, 6 a.m. – 11 p.m. and Friday 6 a.m. – 3 p.m
Where: In front of Rhode Island Hospital, at the corner of Eddy & Dudley Streets
Details: Support Striking Nurses and Caregivers at RI Hospital & Hasbro Children’s Hospital to win a fair and competitive contract for hard-working nurses, technologists & therapists and change the broken culture at Rhode Island Hospital. 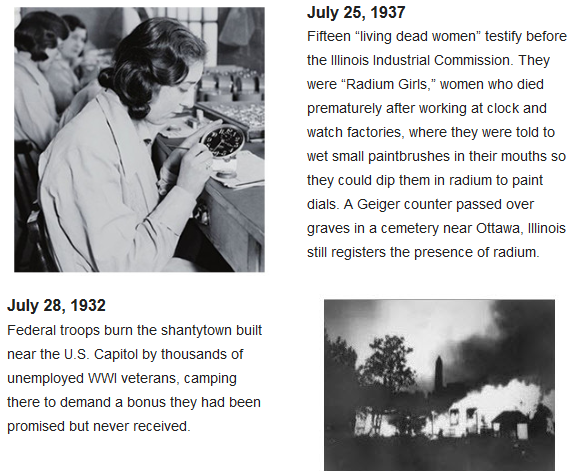 In the first half of the show, Secretary of State Nellie Gorbea sits down with Thom Cahir to talk about the importance of being registered to vote for the upcoming elections, important deadline dates to know, methods of voting, and her department’s website that aids voters register and change their information.
And in the second half of the show, Jim Riley sits down with Executive Vice-President Norman Farias and Vice-President Tracie Galloway, both executive board members of UNAP Local 5098, that struck Lifespan properties, RI Hospital and Hasbro Children’s Hospital; to discuss the real issues that led to that job action.