Skilled maintenance workers at Roger Williams Medical Center represented by Teamsters Local 251 in East Providence, R.I. unanimously ratified a first contract following more than a year of fighting for improvements on the job.

The workers joined Local 251 on January 6, 2017, but faced an uphill battle during negotiations that led to the union filing five unfair labor practice (ULPs) charges against the company. The ULP charges included failure to bargain in good faith, failure to provide a scheduled wage increase and unlawful surveillance. The workers stood together in solidarity throughout the fight, staging an informational picket in front of the medical center in September 2017 to raise awareness of the company’s behavior. -READ MORE

The AFL-CIO brought allies and union leaders together yesterday with the aim of ending sexual harassment in the workplace. When working people join together in union, we can listen to each other, mobilize our co-workers, speak with a unified voice and fight together to win justice in the workplace.

AFL-CIO Secretary-Treasurer Liz Shuler said, “Unions have an important role to play in ending sexual harassment because fighting for dignity and respect on the job is fundamental to the work we do in the labor movement.” –READ MORE

Service employees from Boston to Los Angeles are winning raises and gaining leverage in a bright patch for organized labor.

During the first weeks of 2018, subcontracted service staff at Virginia’s Reagan National and Dulles International airports got a raise. So did baggage handlers, cabin cleaners, and wheelchair attendants at Boston’s Logan airport, who also staged a 36-hour strike to defend their right to organize.

Soon, under laws passed last year, workers at other airports across the country, from Chicago to Los Angeles, will be getting wage bumps, too. -READ MORE

MSN: Her Ticket to a Life She Loves: A Hard Hat

Scrolling through Erin Lakenen’s Instagram inspires instant wanderlust. In one photo the 23-year-old is in Vietnam with a burly snake wrapped around her neck. In another, she overlooks a lush mountain in Ecuador. There’s a shot of her skydiving with her head thrown back in laughter, and one of her hair streaming in the wind as she soars on a picturesque swing.

In between adventures, she returns home to Michigan’s Upper Peninsula to kayak and surf in Lake Superior — even in winter — and renovate the home she recently bought. -READ MORE 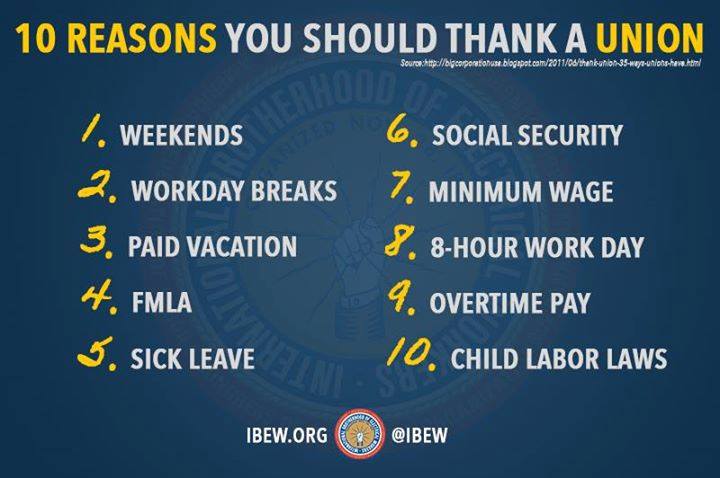 Now This in Politics FaceBook: This is why unions are essential to so many American families. WATCH VIDEO

Full workers’ freedom: That’s the law of the Navajo Nation, which says, in part, “Employees shall have the right to form, join or assist any labor organization for the purpose of collective bargaining without interference, restraint or coercion by a public employer or any other person.”

Unions, please inform your members and share on websites and social media. Thank you!

The Janus Decision: An historic opportunity to organize, energize and fight back.

When: Monday, February 26 @ 6-8:00 p.m.
Where: UFCW, 278 Silver Spring St., Providence, RI
Details: A multi-union forum exploring the impact of JANUS and how we face the challenge together and come out stronger.

1918 – Faced with 84-hour workweeks, 24-hour shifts and pay of 29¢ an hour, fire fighters form The Int’l Association of Fire Fighters. Some individual locals had affiliated with the AFL beginning in 1903.

In the first half of the show, Jim Riley sits down with Lisa Nelson of the Fix Our Schools coalition, and Jerry Drummond of National Grid to talk about energy efficiency, how it could be harnessed better in new school buildings and re-engineered in older schools; how the savings for municipalities could be used towards other necessities for students; and how more modern building design can actually help students learn, with the use of more ambient light and the right color schemes.
And to honor teachers for all they do, especially in a week when they were called upon to protect children in a school shooting, the second half of the program is dedicated to how the brave teachers of New York City fought throughout the 1950’s and finally got recognition in 1962 with a signed contract. There’s even a cameo by RI’s own Ed McElroy in the historical video.